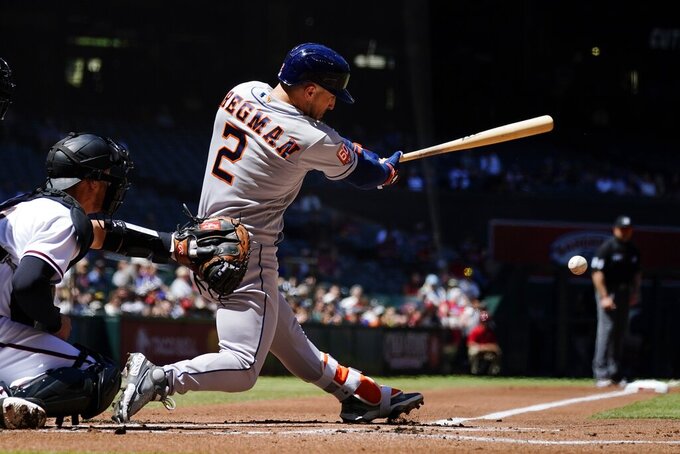 He came through in a critical situation again Wednesday.

Beer tied the game in the 10th inning with an RBI single, and Ketel Marte followed with a game-ending sacrifice fly to give the Diamondbacks a 3-2 win over the Houston Astros.

The game was full of missed opportunities for both teams — tied at 1-all through nine innings — until each scratched across runs in the 10th.

The Diamondbacks got the better of the exchange, falling behind in the top of the 10th before scoring two runs off Houston closer Ryan Pressly (0-1).

“If the ball leaves the yard, that’s great,” Beer said. “But in that situation, if you’re muscling up against a guy like Pressly, that’s when you get in trouble. So you just stick to your approach and try to find a barrel.”

Beer, a rookie with an easy-to-remember last name, became an immediate fan favorite at Chase Field with his opening-day heroics.

This time, he helped the D-backs snap a four-game skid despite leaving 14 runners on base. The teams split the two-game series.

“There’s two or three punches we’ve got to throw at one time and we’ve got to land them all before we start putting up crooked numbers,” D-backs manager Torey Lovullo said. “I think we’re delivering some body blows, we’re getting runners on base, and eventually someone’s going to slug at the right time.”

Arizona's Sergio Alcantara began the 10th inning on second and Jake McCarthy's sacrifice bunt moved him to third. Beer's sharp single through the drawn-in infield got past Houston second baseman Jose Altuve to tie the game at 2-all. Geraldo Perdomo and Cooper Hummel followed with walks off Pressly to load the bases.

Marte hit a deep flyball to left that Chas McCormick dropped, but it didn't matter because a tagging Beer would have easily beaten the throw.

Jeremy Peña was the automatic runner and Jason Castro walked before a passed ball by Arizona's Jose Herrera allowed both runners to advance. Michael Brantley was intentionally walked, and Alex Bregman's sacrifice fly brought home Peña for the 2-1 lead.

Merrill Kelly started for the Diamondbacks and threw 5 1/3 scoreless innings, giving up three hits, two walks and striking out six. He didn't get much run support, which has been a recurring problem for the D-backs early in the season. Oliver Perez (1-1) got the last out of the 10th.

Arizona took a 1-0 lead in the second after Ketel Marte was hit by a pitch on his right foot with the bases loaded, bringing home Pavin Smith. Plate umpire Jim Reynolds didn't see the ball hit Marte but a D-backs challenge confirmed the ball glanced off Marte's foot.

The Astros tied the game in the seventh when Martin Maldonado’s sacrifice fly brought home McCormick.

Houston starter Framber Valdez struggled with his command, needing 76 pitches to get through three innings. He gave up only one run despite surrendering two hits and five walks. Houston's pitchers walked nine batters and hit three.

Altuve is still encouraged by the Astros' first week.

“We've won four out of six,” Altuve said. “That's a good start for us. We're going to keep playing game by game and hopefully keep winning."

Arizona leadoff hitter Cooper Hummel reached base five times, four times via walks and once on a single. Lovullo has said the rookie's ability to force long at-bats and coax walks is a big reason he made the roster.

Astros: OF Yordan Alvarez was out of the lineup for a second straight day because of an illness.

Astros: Houston is off Thursday before continuing its trip at Seattle on Friday. The Astros are scheduled to start RHP Jake Odorizzi (0-0, 4.50 ERA).

Diamondbacks: Arizona has the day off Thursday before its first trip of the season, starting with a three-game series against the Mets. RHP Zach Davies (0-0, 3.60) is scheduled to start Friday for the D-backs. He'll face RHP Chris Bassitt (1-0, 0.00).