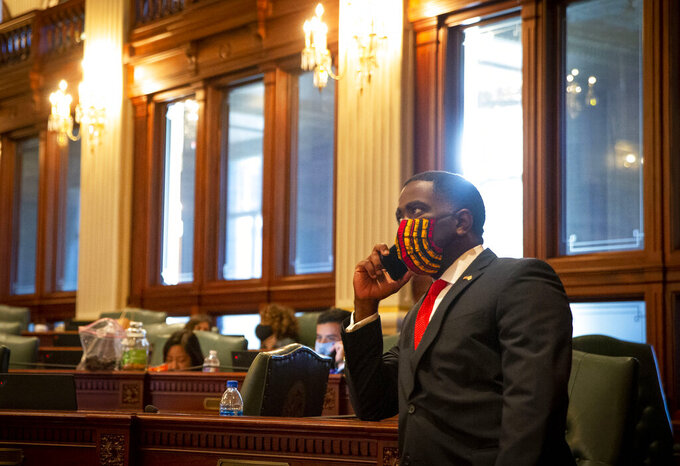 Justin L. Fowler, ASSOCIATED PRESS
Rep. Marcus Evans, Jr., D-Chicago, talks on the phone prior to session starting on the floor of the Illinois House of Representatives at the Illinois State Capitol in Springfield, Ill., Thursday, Sept. 9, 2021. The Illinois House is poised to approve a wide-ranging plan to eliminate carbon emissions by 2050. A vote planned for Thursday includes a compromise allowing to coal-fired plants to remain open until 2045 but cut their emissions by nearly half in the next 14 years. (Justin L. Fowler/The State Journal-Register via AP)

SPRINGFIELD, Ill. (AP) — The Illinois House on Thursday approved a wide-ranging plan to eliminate carbon emissions by 2050, with a compromise allowing two coal-fired plants to remain open until 2045 but cut their emissions by nearly half in the next 14 years.

The plan was endorsed 82-33 after 2 1/2 hours of debate not over the goal of shrinking the state's carbon footprint, but how to do it and what will replace the power currently generated by fossil fuels. Republicans largely rejected the proposal saying that they support helping keep northern Illinois nuclear plants operating but that the abrupt end of coal-generated power would cost thousands of jobs and merely leave Illinois reliant on energy produced by burning fossil fuels in other states.

Before Thursday night's vote, Democratic Gov. J.B. Pritzker, unhappy with a proposal that won Senate approval last week, lauded and agreement he said “puts consumers and climate first, while protecting and creating jobs." He pledged to sign the measure into law if the Senate accepts the House changes.

The idea is that Illinois would do its part to slow climate change by eliminating carbon emissions. The legislation, which is sponsored by Democratic Rep. Marcus Evans of Chicago, requires a $700 million subsidy to keep the state’s nuclear power-plant fleet afloat, and includes provisions that would close coal plants in central and southwest Illinois, invest in renewable energy such as wind and solar and a $4,000 rebate to encourage the purchase of electric vehicles.

Earlier Thursday, the House approved an overhaul of ethics rules for lawmakers, lobbyists and others after Pritzker used an amendatory veto to change a plan approved in May.

The chief change from the clean-energy proposal the Senate adopted affects two coal plants, Springfield's municipally owned City Water Light & Power and the Prairie State Generating Co. in Marissa, 41 miles (65 kilometers) southeast of St. Louis. Private power plants burning coal must close by 2045. But after pressure from environmental groups, lawmakers would now require a step-down in carbon emissions of 45% by 2035 in the latest version of the bill.

“The planet is not waiting for us,” Morgan said.

Driving the action as much as Pritzker's pledge to make Illinois a no-carbon state by 2050 is Exelon's threat to begin closing nuclear plants it owns in Byron and Morris. That would cost thousands of jobs and a large share of the carbon-free power the state already produces.

But critics complain that Exelon, which got a nuclear-fleet subsidy in an energy plan several years ago, is getting a monstrous ratepayer gift despite an ongoing federal investigation invovling its subsidiary, ComEd. ComEd acknowledged to federal prosecutors last year that it had engaged in a decadelong bribery scheme in Springfield that has implicated former House Speaker Michael Madigan and led to indictments of Madigan’s closest confidante and a former ComEd CEO, among others.

Some opponents have questioned the increase of utility rates under the plan, saying it could cost ratepayers as much as $15 or more monthly. Evans said Thursday the increase would not top $4.50 a month.

“We’re guessing,” said Rep. Keith Wheeler of Oswego said earlier Thursday “We’re putting a huge goal on the board and if we don’t guess right, we’ll be buying fossil-based power from neighboring states.”

At the same time, Rep. C.D. Davidsmeyer, a Jacksonville Republican, pointed out that the legislation doesn't affect any coal-fired plants which provide power to universities and state-owned facilities, including a plant two blocks from the Capitol which helps light up downtown Springfield state buildings.

This story has been corrected to show that the subsidy in the legislation will go to Exelon, which owns the nuclear plants, not to ComEd.