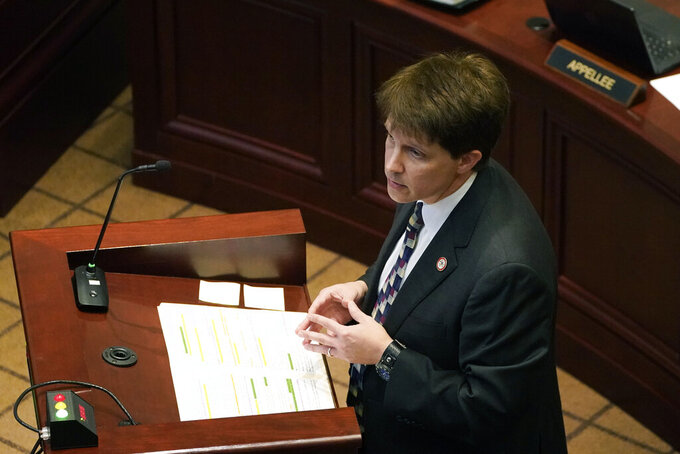 Getting an initiative on the statewide ballot is not easy, and most organizers never manage to gather enough signatures within a one-year deadline.

Two of the three new proposals, early voting and Medicaid expansion, deal with issues the Republican-controlled Legislature has chosen not to handle.

The flag initiative could undo the Legislature's historic decision last summer to retire a 126-year-old Mississippi banner that was the last state flag in the U.S. to include the Confederate battle emblem.

Legislators voted out the old flag as protests against racial injustice were happening in Mississippi and around the nation after the killing of a Black man, George Floyd, in Minneapolis police custody. Leaders of business, education, religion and sports groups — including, notably, coaches from many of Mississippi's universities — converged on the state Capitol to appeal for change, saying the Confederate imagery represented racism.

The law that mothballed the old flag mandated that a new one include the words, “In God We Trust.” A commission designed one with a magnolia encircled by stars and the phrase. The single design went on the November ballot for a yes-or-no vote, and people approved it by a wide margin.

Supporters of the Confederate-themed flag argued that voters should have decided whether to keep the old banner. People have been gathering signatures for months for Initiative 74, which would put four designs on the ballot: The old flag, the new flag, a banner that was used to celebrate Mississippi's bicentennial in 2017 and a star-themed flag designed by Jackson artist Laurin Stennis.

The secretary of state's office last week published the ballot title and ballot summary for Initiative 76, the Medicaid expansion proposal. That means organizers can begin gathering signatures on petitions.

The ballot title and ballot summary have not yet been published for the early-voting initiative.

The Mississippi Constitution says petitioners must gather an equal number of signatures from five congressional districts. The state dropped from five congressional districts to four after the 2000 Census, but the constitution’s language about initiatives was not updated. Butler’s lawsuit argues that this creates a mathematical impossibility with four districts because the constitution still specifies that no more than one-fifth of the signatures may come from any single district.

A deputy attorney general argued that Mississippi has two sets of congressional districts — the current four that are used for electing U.S. House members, and the old five that are still used for making appointments to some boards and commissions. Butler's attorney said the plain definition of a congressional district is evident in its name — it's for electing people to send to Washington.

The state Health Department is working to create a medical marijuana program by the middle of this year, as required by Initiative 65. Justices gave no indication of when they will rule in the legal dispute. Their decision will affect not only the fate of Initiative 65 but also the process that organizers use to put other initiatives on the ballot.