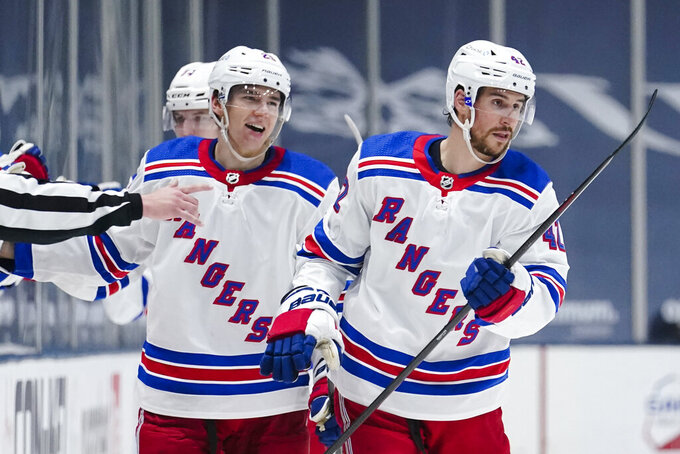 Kyle Palmieri and Jean-Gabriel Pageau scored in the first period for the Islanders, who have won eight of 11 and are 18-2-2 at home. Mathew Barzal had two assists.

Ilya Sorokin stopped 24 shots to improve to 11-3-1 this season. He moved to 8-0 at home, becoming the second rookie in last 39 years to win eight straight at home — joining teammate Semyon Varlamov, who did it 2009-10 for Washington.

The Islanders recovered after giving up their early lead and kept pace with Washington atop the East Division, two points ahead of third-place Pittsburgh. All three teams have 14 games remaining.

“I thought we stuck with it, we did what we had to do," Pulock said. "At the end of the day, we got two points. That’s what we’re here for.”

Libor Hajek and Brendan Smith scored in the second period for the Rangers, who are 4-1-2 in their last seven games. Igor Shesterkin finished with 29 saves — including 15 in the first period.

The Rangers pulled four points behind Boston for the fourth and final playoff spot in the East. The Bruins also have two games in hand.

“Every point counts," Smith said. “Yeah, we want two, obviously. ... If we can keep playing this way, keep getting those points and slide in I think we can be a team that can do damage.”

It was a big bounce-back win for the Islanders, who lost 4-1 here to the Rangers on Friday night and finished 5-1 on a six-game homestand.

“It felt good, obviously beating the Rangers is a big thing and winning games at home is huge especially this time of year," Palmieri said. "The team found a way to get it done tonight and that’s all you could ask for.”

In the extra period, Pulock got a pass from Barzal and beat Shesterkin from the right side on the blocker side for his first goal since March 7, 2020.

“That one feels good,” Pulock said. “It’s been a stretch, but obviously found one in a key moment and found a way to win a game.”

Seconds earlier, Shesterkin had made a sliding save going to his right on an attempt by Travis Zajac, resulting in a faceoff in the left circle.

Both teams had chances late in regulation. Kevin Rooney fired a shot off Islanders defenseman Scott Mayfield's skate and the crossbar with about 3 minutes left. The Islanders had a chance on the other end, but Shesterkin denied Andy Greene's attempt 45 seconds later.

Trailing 2-0 after 20 minutes, the Rangers came out aggressive in the second and had several scoring chances while outshooting the Islanders 9-2 over the first 13 minutes of the period.

Hajek pulled the Rangers to 2-1 as his shot from the point got through traffic and beat Sorokin for his second with 9:37 left in the middle period.

Smith tied it less than two minutes later as he pounced on a loose puck in the middle and fired a shot that beat Sorokin high for his third with 7:44 left. Rookie right wing Vitali Kravtsov got his first NHL point on the play in his fifth game.

“We knew they were going to have a push,” Islanders coach Barry Trotz said. “Coming out of our end we didn’t execute. We lost few more battles and we got beat to the net a few times. ... It killed all our speed, it killed all our ability to do what we do.”

The Islanders outshot the Rangers 17-8 in the first period, scoring early and late to take a 2-0 lead.

Palmieri got the Islanders on the scoreboard with his first goal since being acquired from New Jersey last Wednesday. On a power play, Josh Bailey's shot from the right point was deflected by Brock Nelson to Palmieri, who put it in from the left side for his ninth of the season at 1:47.

Pageau doubled the Islanders' lead in the closing seconds of period. Mathew Barzal brought the puck up the ice, passed to Jordan Eberle on the right side. Eberle passed it across to Pageau, who fired one-timer past Shesterkin on the glove side with 8 seconds remaining for his 12th.

“Not the start we wanted,” Rangers defenseman Jacob Trouba said. “We came out and played better in the second and third (periods). Good sign to battle back, yet couldn’t find the last goal.”

Two nights after the Rangers' Mika Zibanejad was whistled for the game's only penalty, each team was called for three. The Islanders went 1 for 3 on the power play, and the Rangers were 0 for 3.

The Islanders acquired 2020 Stanley Cup-winning D Braydon Coburn from Ottawa for a 2022 seventh-round pick. The 36-year-old has two points in 16 games with the Senators this season.

In other roster moves Sunday, the Islanders placed F Ross Johnston on IR and moved F Oliver Wahlstrom from the taxi squad to the roster. Wahlstrom replaced Leo Komarov in the active lineup.

On this date in 1975, the Islanders beat the Rangers on J.P. Parise’s goal 11 seconds into overtime at Madison Square Garden to win a three-game opening-round playoff series. It gave the Islanders, in their third season, their first postseason series win in franchise history.

Rangers: At New Jersey on Tuesday to open a stretch of four games in six days against the Devils.

Islanders: At Boston for a two-game series on Thursday and Friday.