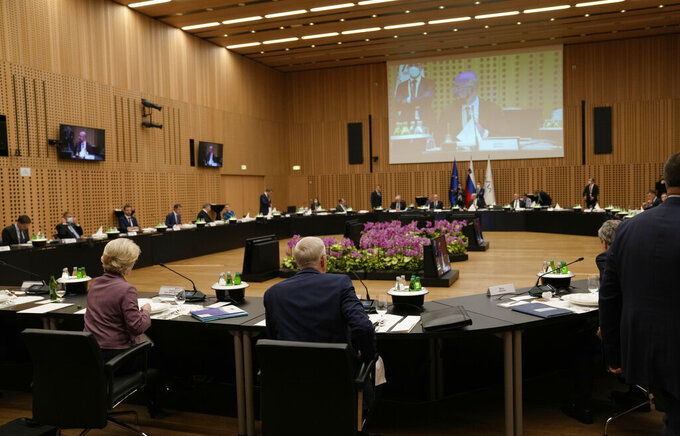 BRDO CASTLE, Slovenia (AP) — European Union leaders met for the first time Tuesday since the messy Western troop withdrawal from Afghanistan and France's loss of a multibillion-dollar submarine deal with Australia, events that they argue have exposed Europe's need for more autonomy on defense.

With the 27-nation trade bloc’s tense relationship with China and rising energy prices also on the agenda, they had plenty to discuss during their dinner at Brdo Castle in Slovenia. They have a summit with leaders from neighboring Balkans countries scheduled Wednesday.

The informal talks were intended to prepare the ground for an EU summit later this month in Brussels and a March meeting focusing on European defense.

The dinner focused on the role of the European Union on the international scene in light of recent geopolitical developments, including the situation in Afghanistan and the AUKUS submarine deal.

“Drawing the lessons of recent crises, we are committed to consolidating our strengths and strengthening our resilience by reducing our critical dependencies," EU Council president Charles Michel said after the meeting. “To become more effective and assertive on the international stage, the European Union needs to increase its capacity to act autonomously."

The Taliban’s takeover of Afghanistan and the rushed airlift operation that followed the U.S. decision to pull out have laid bare the EU’s dependency on its ally. Without American support, European countries wouldn’t have been able to guarantee the safe exit of their citizens or even their troops this summer.

The Indo-Pacific defense deal between the U.S., Australia and Britain that led Australia to cancel the contract for diesel-electric French submarines has contributed to more frustration in the EU camp over the U.S. unilateral moves.

Australia is acquiring U.S. nuclear-powered vessels instead of the French submarines. The Australian government's move has infuriated France, which is seeking clarification from Washington about its commitment to European allies. Several EU member countries have expressed solidarity with France.

French president Emmanuel Macron and U.S. President Joe Biden have discussed the rift over the phone to ease tensions, and Secretary of State Antony Blinken met with Macron in Paris on Tuesday to try to restore the French government's trust.

The chief of the EU's executive branch, European Commission President Ursula von der Leyen spoke with Biden by phone on the eve of the summit. Von der Leyen said they discussed climate change, defense, trade, the western Balkans and other geopolitical issues.

Macron is now calling on France's EU allies to use the bloc's shortcomings in Afghanistan and the fallout of AUKUS as a springboard for developing European capabilities while at the same time strengthening ties with the U.S.

“On the technological and industrial, economic, financial, but also military levels, we must build the terms of a stronger Europe,” Macron said. “You know that this is what I deeply believe. A Europe that can take its share (of responsibilities) for itself and which can choose its partners and work closely with its historical allies. And I think it’s important that we can discuss this tonight in a geopolitical context that is increasingly in turmoil.”

Michel also advocates more strategic autonomy through a partnership between the European Union and NATO.

“NATO is a security pillar on which we rely, and at the same time we see that we need to be able to act more autonomously to make our alliances stronger," Michel said. “Strong allies make strong alliances."

The 27 leaders also discussed their relation with China, a theme they have not tackled as a group for over a year. Since their last talks, the bloc adopted a massive investment deal with Beijing but also approved sanctions against Chinese officials over human rights abuses in the far western Xinjiang region.

“We will also pursue our own interests, in particular vis-a-vis China, which we consider as a competitor, a partner and a systemic rival," Michel said.

Hours before the leaders’ dinner, police fired tear gas and water cannons at anti-government protesters in Slovenia’s capital, Ljubljana, located about 30 kilometers away.

Hundreds of protesters showed up to oppose the Slovenian government’s pandemic restrictions. The demonstration was not directly linked to the EU summit, but protest leaders apparently sought the opportunity to get more media attention from foreign reporters covering the event.

At the Renaissance-style fortified palace that was used by the late Yugoslavia President Josip Broz Tito as a summer residence, leaders enjoyed a full-course dinner with trout, gnocchi filled with white cheese and beef cheek.