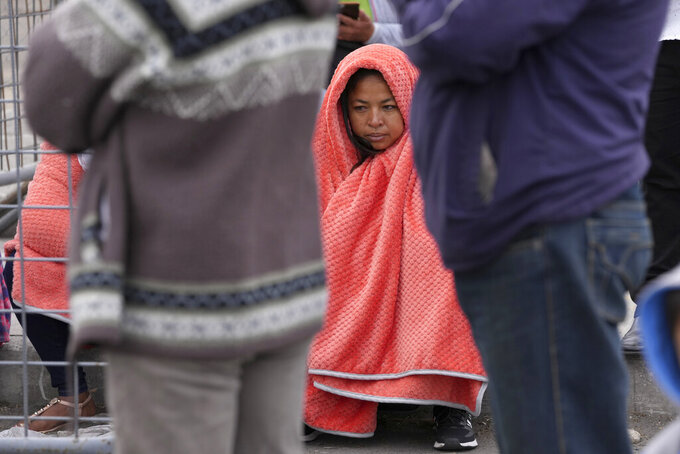 Dolores Ochoa, ASSOCIATED PRESS
Family and friends of inmates wait for news of their jailed loved ones after a deadly prison riot in Latacunga, Ecuador, Tuesday, Oct. 4, 2022. A clash between inmates armed with guns and knives inside the prison has left at least 15 people dead and 20 injured. (AP Photo/Dolores Ochoa)

QUITO, Ecuador (AP) — The death toll from a bloody fight among inmates at a prison in central Ecuador rose to 16 Tuesday, and authorities said one of the dead was an alleged drug gang boss who had evaded charges in Peru by faking his death during the pandemic.

Officials said the number of wounded from clashes among inmates armed with guns and knives at the state prison in Latacunga stood at 43, with two in critical condition. The fighting erupted Monday and continued into the early hours of Tuesday.

The drug capo was identified as Leonardo Norero, alias “El Patron.” Authorities said that they could confirm his death but that rules allowed details of how he died to be given only to his family.

Norero, 35, had been arrested in an exclusive area of Guayaquil in late May during a raid that officials said seized 42 gold bars, weapons, jewelry and about $7 million in cash. They said he owned at least seven companies and luxury real estate, among other assets.

He was being held at the medium-security prison in Latacunga, about 80 kilometers (50 miles) south of the capital, Quito, while awaiting trial on drug trafficking and money laundering charges.

Norero also was wanted on drug trafficking charges in Peru, where authorities say he managed to evade justice in mid-2020 by faking his own death amid the coronavirus pandemic and escaping to Ecuador. His lawyers had presented a falsified death certificate and purported photos of his death.

Dozens of soldiers arrived at the Ecuadorean prison at midday Tuesday to reinforce security while administrative personnel were evacuated from inside the complex.

Prison official said 316 inmates were killed by other prisoners last year, while so far this year there have been 106 fatalities.

The worst battle occurred in September 2021 at the Litoral Penitentiary in Guayaquil, when 125 prisoners were killed. Two months later, a fight at the same prison caused 65 deaths.