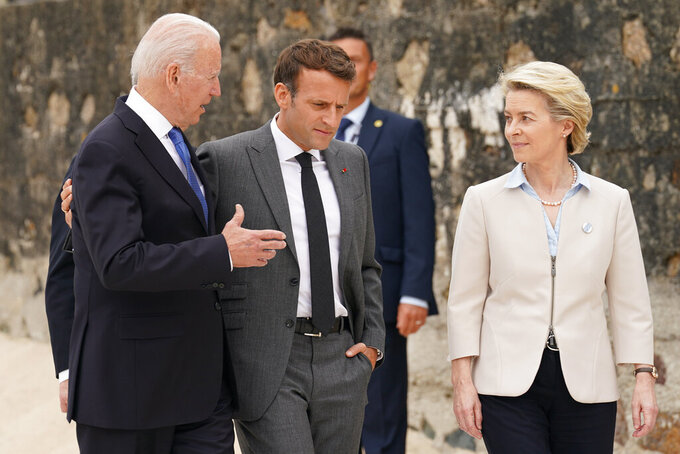 President Joe Biden might have persuaded some of the world's largest economies to hike taxes on corporations, but the U.S. Congress could be a far tougher sell.

White House press secretary Jen Psaki said Friday that leaders of the Group of Seven — which also includes the United Kingdom, France, Canada, Germany, Italy and Japan — agreed with Biden on placing a global minimum tax of at least 15% on large companies. The G-7 leaders, participating in a three-day summit in England, affirmed their finance ministers who earlier this month endorsed the global tax minimum.

“America is rallying the world to make big multinational corporations pay their fair share so we can invest in our middle class at home,” Jake Sullivan, the president's national security adviser, said Friday on Twitter.

A minimum tax is supposed to halt an international race to the bottom for corporate taxation that has led multinational businesses to book their profits in countries with low tax rates. This enables them to avoid taxes and encourages countries to slash rates. The minimum rate would make it tougher for companies to avoid taxes, and could possibly supplant a digital services tax that many European nations are imposing on U.S. tech firms that pay at low rates.

Biden administration officials believe the use of overseas tax havens has discouraged companies from investing domestically, at a cost to the middle class. The president hopes a G-7 endorsement can serve as a springboard for getting buy-in from the larger Group of 20 complement of nations.

The agreement is not a finished deal, as the terms would need to be agreed upon by countries in the Organization for Economic Cooperation and Development and implemented by each of them. The president needs other countries to back a global minimum tax to ensure that his own plans for an enhanced one in the U.S. don't hurt American businesses.

”It has the potential to stop the race to the bottom," said Thornton Matheson, a senior fellow at the Tax Policy Center. "It would be a huge sea change in the way things have been going in corporate taxes for the last three decades.”

The idea of an enhanced global minimum tax is also an integral part of Biden's domestic agenda, but it faces resistance in Congress.

The president has proposed using a global minimum tax to help fund his sweeping infrastructure plan. His budget proposal estimates it could raise nearly $534 billion over 10 years, but Republicans say the tax code changes would make the United States less competitive in a global economy.

Treasury Secretary Janet Yellen framed the agreement as a matter of basic fairness after the finance ministers' meeting.

“We need to have stable tax systems that raise sufficient revenue to invest in essential public goods and respond to crises and ensure that all citizens and corporations fairly share the burden of financing government,” she said.

Senate Republican Leader Mitch McConnell of Kentucky has repeatedly said his party will oppose any measures that undo the 2017 tax cuts signed into law by President Donald Trump.

The 2017 overhaul did create a new way to tax companies' foreign profits with what is known as “global intangible low-taxed income.” Congressional Democrats said that framework encouraged firms to invest in foreign countries, instead of at home.

Biden has proposed raising that rate to 21% among other changes to the code. The administration views the G-7's 15% as a floor rather than a ceiling for rates. But the G-7's plan varies from what Biden has proposed and there are details to be finalized, with tax experts noting that there appear to be gaps in rates and the treatment of assets such as buildings and equipment.

Democrats want to dig into the fine print of any agreement before giving their full-throated approval of what comes out of the G-7, which means that Biden will have to keep making the sale to U.S. voters and their representatives.

Senate Finance Committee Chairman Ron Wyden of Oregon favors the general idea of a global minimum tax. But Wyden said in a statement with House Ways and Means Committee Chairman Richard Neal of Massachusetts that they need to dig into the agreement to see if Americans would really benefit.

“We are optimistic that a strong multilateral agreement can be reached to harmonize our international tax rules, end the race to the bottom and put a stop to digital services taxes,” the two Democratic lawmakers said. "We look forward to working with the administration and evaluating the outcome of these negotiations for American workers, businesses and taxpayers.”