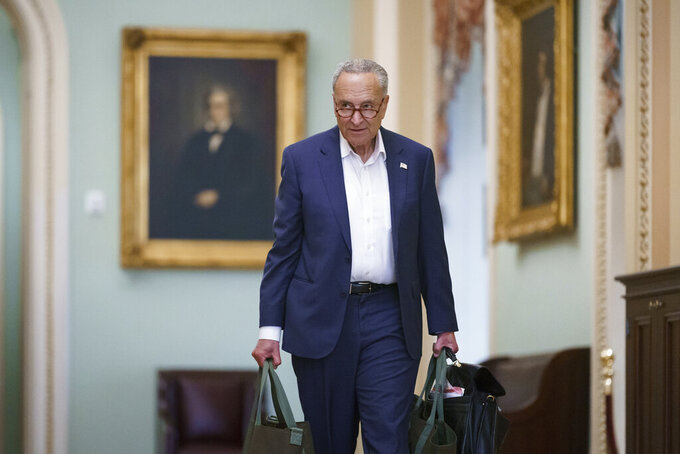 J. Scott Applewhite, ASSOCIATED PRESS
Senate Majority Leader Chuck Schumer, D-N.Y., arrives at the Capitol in Washington, Monday, July 12, 2021. Congressional Democrats and immigration advocates are staring at their best chance in years to overcome Republican opposition and give millions of people in the U.S. without legal authorization a way to become citizens. (AP Photo/J. Scott Applewhite)

WASHINGTON (AP) — Congressional Democrats and immigration advocates are staring at their best chance in years to overcome Republican opposition and give millions of people in the U.S. without legal authorization a way to become citizens.

Their goal is to stuff the language into a huge measure this fall financing many of President Joe Biden’s priorities that would be shielded from a Republican Senate filibuster. That bill-killing procedure requires a virtually impossible 60 votes to overcome, but erasing that danger with a Democrat in the White House means they could score an immigration triumph by themselves after years of Republican blockades.

“This is the chance to finally get it done,” said Kerri Talbot, deputy director of the Immigration Hub, a pro-immigration strategy group.

Yet Democrats’ prospects, while tantalizing, remain murky because of two major hurdles.

Democrats in the narrowly divided Congress will need virtual unanimity to approve the sweeping legislation, which could include Biden's proposed tax boosts on the wealthy and other proposals likely to cause political heartburn. On immigration alone, the party will need solid support from vulnerable swing-district Democrats and moderates, whom Republicans are certain to accuse of favoring amnesty and open borders in next year’s elections for congressional control.

But Republicans and conservative groups sense a favorable political environment for themselves. They cite large numbers of migrants at the U.S.-Mexico border recently and growing public concern with crime, which the GOP often links to immigration.

“It would be a harder fight for our side if the administration were actually controlling the border,” said Rosemary Jenks, government relations director for NumbersUSA, which favors limiting immigration. “It doesn’t seem like a great way to go into the midterms” for Democrats.

Yet perhaps Democrats’ biggest hurdle is the Senate parliamentarian, Elizabeth MacDonough, who determines whether legislative language follows the chamber’s rules. MacDonough, 55, is a respected impartial arbiter, but Democrats haven’t forgotten that she ruled against including another coveted progressive priority, a minimum wage increase, in their COVID-19 relief package months ago, essentially dooming the provision.

In a crucial first step in this process, Congress must approve a budget resolution. Senate Budget Committee Chairman Bernie Sanders, I-Vt., has been trying to win Democratic support for one he hopes to unveil soon.

The budget will be pivotal in two ways. First, it will contain language preventing Republicans from filibustering the subsequent bill funding Biden’s priorities. By law, the budget resolution itself cannot be filibustered.

Second, the budget will set overall spending and revenue limits for that forthcoming spending bill, expected to be several trillion dollars. It will also assign congressional committees specific amounts to spend or raise in revenue as they write language bolstering climate, family support and other priorities.

In an early budget draft, Sanders proposed creating multiyear pathways to legal permanent residency, and potentially citizenship, for four groups of immigrants without legal status. These are people brought illegally to the U.S. as children, called “Dreamers”; others who fled violence or disasters in certain countries; essential workers and farmworkers.

Sanders said in a brief interview late Monday that his budget will include the immigration language “if I have anything to say about it.”

Because some immigrants fit into multiple groups, it's hard to say exactly how many people Sanders’ proposal would help. The liberal Center for American Progress estimates it would affect 6 million people — barely over half the 11 million immigrants in the U.S. illegally whom Biden wants to assist, but still huge.

“In the whole scheme of immigration reform, it does not go far enough,” Rep. Raul Ruiz, D-Calif., chair of the Congressional Hispanic Caucus, said of Sanders' plan. "But we are strategically tailoring the groups that would most likely fit into a budgetary framework” so it would survive the parliamentarian perusal.

Under Senate rules, provisions in a bill immune from filibusters must affect spending or revenue in a way that isn't “merely incidental” to that provision's overall policy. That call will be up to MacDonough, the parliamentarian, to make.

Democrats are pinning their hopes on a 2005 ruling by an earlier Senate parliamentarian that gave the green light to a narrower immigration proposal, though that provision never cleared Congress.

Border security money is especially critical for Democrats facing close 2022 reelections so they can argue they're being tough, not just swinging doors open to immigrants. This could be important for moderates like Sen. Mark Kelly, D-Ariz., and House lawmakers from closely divided or border-area districts.

Also being watched closely, though not facing imminent reelection, are Sens. Joe Manchin of West Virginia, one of Congress' most conservative Democrats, and hard-to-predict centrist Kyrsten Sinema, D-Ariz.

Sanders' security proposal “shows one of the most progressive members of the Senate is saying, ‘We’ve got to pay attention to border security,’” said Ali Noorani, president of the National Immigration Forum, which supports immigration. “It shows he’s taking the politics of this seriously.”

Rep. Jesus “Chuy” Garcia, D-Ill., told The Hill publication he’d oppose the sweeping spending bill unless it has a citizenship pathway. We Are Home, a coalition of pro-immigration groups, and other organizations have announced a $50 million campaign to prod lawmakers to back the push.

“People are fed up with empty promises,” said Lorella Praeli, co-president of the progressive group Community Change Action and a We Are Home leader. “Focus on the people who elected you.”

Democrats have no votes to spare in the 50-50 Senate, and this autumn will be able to lose no more than three House votes.

The House approved two bills in March creating pathways to citizenship for many “Dreamers,” refugees from troubled countries and agricultural workers. While bipartisan talks have continued, the measures have gone nowhere in the Senate, largely due to GOP opposition.

“If we use every tool and every ounce of our power, then we can legalize millions this year,” said Frank Sharry, executive director of the pro-immigrant group America's Voice.