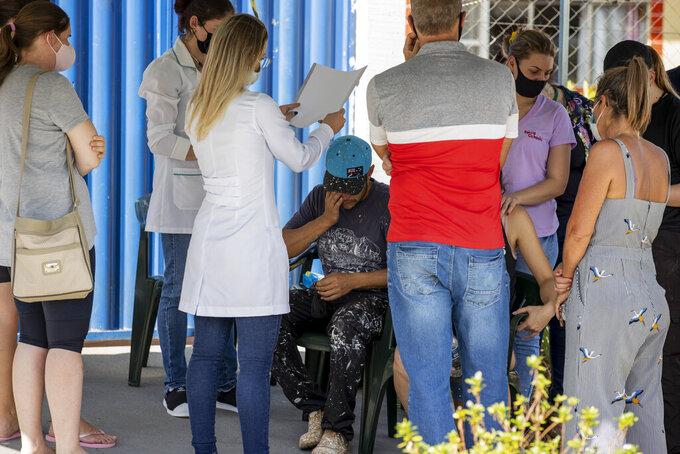 Liamara Polli, ASSOCIATED PRESS
Relatives gather outside the Aquarela preschool in Saudades, in the southern state of Santa Catarina, Brazil, Tuesday, May 4, 2021. According to police an 18-year-old teenager entered the day care center with a knife and stabbed and killed three children and a teacher. (AP Photo/Liamara Polli)

RIO DE JANEIRO (AP) — Officials in southern Brazil say a knife-wielding attacker killed three children and at least one teacher at a day care center in the city of Saudades on Tuesday.

Municipal education secretary Gisela Hermann described “a scene of terror” at the school in an interview with the online G1 news site. "There was a guy lying on the floor, but still alive, a dead teacher, a dead child too,” she said.

The city's mayor, Maciel Schneider, said on Globo News TV that a youth aged between 14 and 18 years old had entered the day care center with a knife.

The police department had no immediate statement.

One of the center workers, who was not present when the assault took place, told Globo her colleagues had managed to hide the institution's youngest babies. “They hid them under (furniture) and a teacher was able to secure the door. He tried to open it but then he gave up.”

Santa Catarina state Gov. Carlos Moisés lamented the “devastating news” on his official Twitter profile. “My solidarity with families, the school community and all residents of this welcoming city.”