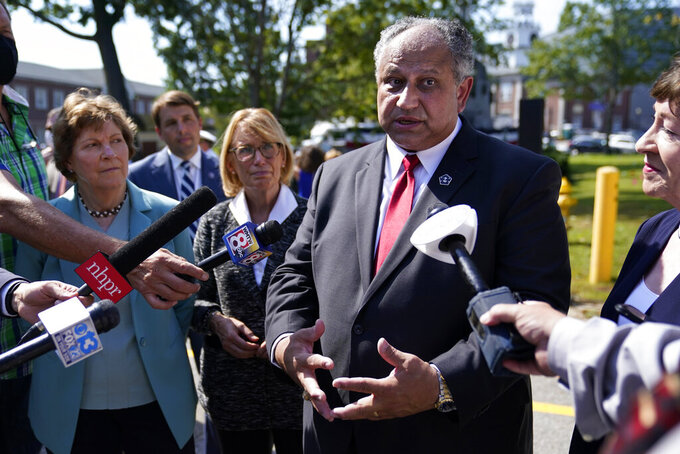 Getting vessels repaired and overhauled on time is crucial as China threatens sea lanes, Russia’s navy is emboldened and “rogue states and terrorists” threaten vessels in the Persian Gulf, Del Toro said.

“The threats on the horizon are very real today,” he said, exhorting workers to remain focused during a groundbreaking ceremony.

The seven-year project will allow two submarines to utilize the former Dry Dock 1 simultaneously. It will accommodate both Los Angeles- and Virginia-class attack submarines, increasing capacity.

The contract represents “the largest and most complex project” ever awarded by the Naval Facilities and Engineering Command, said Capt. Daniel Ettlich, the shipyard's commander.

The project doubles the dry dock capacity for Virginia-class submarines and “cements the future of Portsmouth Naval Shipyard and the future of our submarine force," he said.

The project is a key part of the Navy’s $21 billion modernization efforts at four public shipyards that repair and overhaul ships, with a goal of eliminating a backlog and returning ships to the fleet faster.

About 60% of today’s fleet was commissioned in 2001 or before — causing growing maintenance and operation costs.

Dignitaries at the groundbreaking at the shipyard included Sens. Jeanne Shaheen and Maggie Hassan of New Hampshire and Sens. Susan Collins and Angus King of Maine.

The event was Del Toro's first visit to a public shipyard since he became Navy secretary last month. Afterward, he planned to visit a private shipbuilder, Maine's Bath Iron Works.