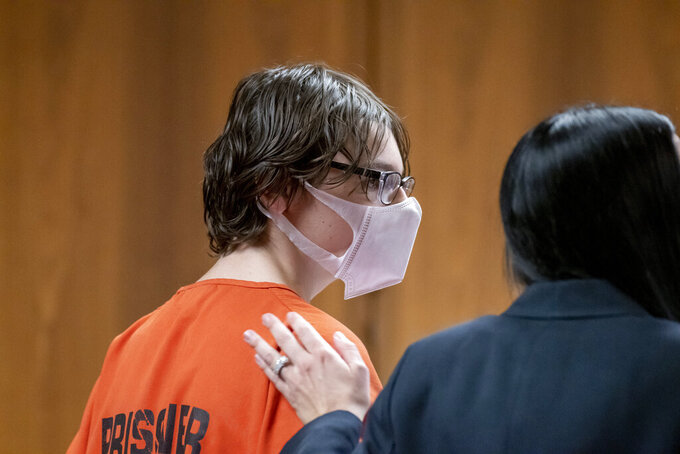 David Guralnick, ASSOCIATED PRESS
Ethan Crumbley attends a hearing at Oakland County circuit court in Pontiac, Mich., on Feb. 22, 2022. A judge on Thursday, June 23, 2022 postponed a murder trial until January in the case of the teenager accused of killing four fellow students and injuring others at a Michigan high school. Lawyers for Crumbley said a September trial date wouldn't leave enough time to go through evidence and prepare. (David Guralnick/Detroit News via AP, Pool)

PONTIAC, Mich. (AP) — A judge on Thursday postponed a murder trial until January in the case of a teenager accused of killing four fellow students and wounding others at a Michigan high school.

“I do find good cause,” Judge Kwame Rowe said in setting a Jan. 17 trial.

Crumbley, 16, is charged with murder and other crimes in the November shooting at Oxford High School. Earlier that day, his parents were summoned to discuss the boy's disturbing drawings on a math assignment, but they declined to take him home.

James and Jennifer Crumbley are charged with involuntary manslaughter. They're accused of making a gun accessible to their son and failing to get him help after he showed signs of mental distress. Their trial is set for Oct. 24. The couple’s attorneys deny the allegations.

For more of the AP’s coverage of the Michigan school shooting: https://apnews.com/hub/oxford-high-school-shooting