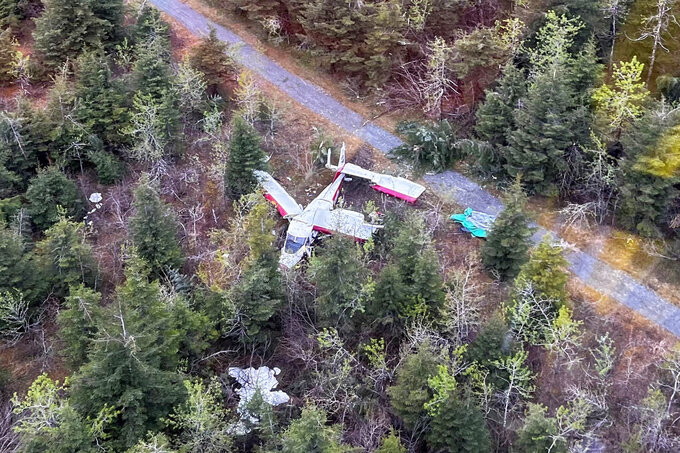 Uncredited, ASSOCIATED PRESS
In this photo provided by the U.S. Coast Guard is the scene where a Dehavilland DHC-3 fixed-wing single engine plane crashed near Yakutat, Alaska, on Tuesday, May 24, 2022. All four people on board an airplane were injured when it crashed Tuesday while attempting to land at a rural Alaska air strip. Three of those hurt were eventually sent to hospitals in Anchorage while the fourth with minor injuries was treated in Yakutat. (U.S. Coast Guard via AP)

ANCHORAGE, Alaska (AP) — An aircraft crashed while attempting to land on a rural Alaska airstrip lined by trees, injuring all four people on board, officials said Wednesday.

Three people seriously hurt in Tuesday's crash at Dry Bay airstrip were sent to hospitals in Anchorage. A fourth person with minor injuries was treated in the nearby southeast Alaska community of Yakutat, the Coast Guard said in a statement.

The names of those injured weren't immediately released.

The crash occurred about 3 p.m. Tuesday as the Yakutat Coastal Airlines charter flight was attempting to land on the airstrip, said Clint Johnson, head of the Alaska division of the National Transportation Safety Board. The flight had originated from Yakutat.

The de Havilland DHC-3 fixed-wing single-engine airplane crashed short of the runway in tree-covered terrain, Johnson said. The NTSB will investigate the cause of the crash.

The Dry Bay airstrip is about 30 miles (48 kilometers) southeast of Yakutat.

The Coast Guard was informed of the crash by an emergency locator transmitter alert and by calls from the public.

A Coast Guard helicopter from Sitka arrived on scene and took two people with “critical back issues” to Yakutat, the Coast Guard statement said. Another person with breathing issues was taken to Yakutat by that city’s police department.

The Coast Guard then flew all three to Anchorage for treatment in an HC-130 Hercules airplane from Kodiak.

Tanya Hutchins, who described herself as an owner of Yakutat Coastal Airlines, said she was not ready to comment about the crash when reached by telephone Wednesday.