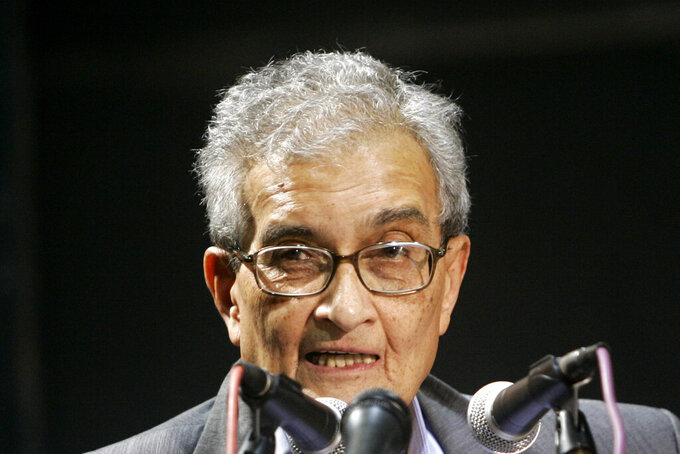 Bikas Das, ASSOCIATED PRESS
FILE - In this Monday, Feb. 23, 2009 file photo, Nobel Prize-winning economist Amartya Sen delivers a lecture on "Economics, Politics and Our Lives" in Calcutta, India. Sen, the economist who studied the causes of famines, will be recognized with this year’s Princess of Asturias award in the Social Sciences category, it was announced Wednesday, May 26, 2021. The 87-year-old economist and philosopher has devoted his career to studying poverty and theories of human development. (AP Photo/Bikas Das, file)

MADRID (AP) — Amartya Kumar Sen, an Indian economist and philosopher who studied the causes of famines, will be recognized with this year's Princess of Asturias award in the social sciences category, the Spanish foundation behind the prizes announced Wednesday.

The 87-year-old Sen has devoted his career to studying poverty and theories of human development. His 1981 essay on “Entitlement and Deprivation” famously proved that the greatest famines in history took place when food was available but some groups couldn't access it.

Sen's theories on a person's capacity, interacting with the concept of “positive freedom,” or absence of interference, have been incorporated into different social science disciplines and inspired U.N. development plans.

"His entire intellectual career has contributed in a profound and effective way to promoting justice, freedom and democracy,¨ the award jury wrote in a statement.

Sen won the Nobel Memorial Prize in Economic Sciences in 1998.

The 50,000-euro award ($61,000) is one of eight prizes, including in the arts, communications and sports, handed out annually by the Asturias Princess Foundation, which is named for Spanish Crown Princess Leonor.

The awards are among the most prestigious in the Spanish-speaking world. An awards ceremony typically takes place in October in the northern Spanish city of Oviedo.