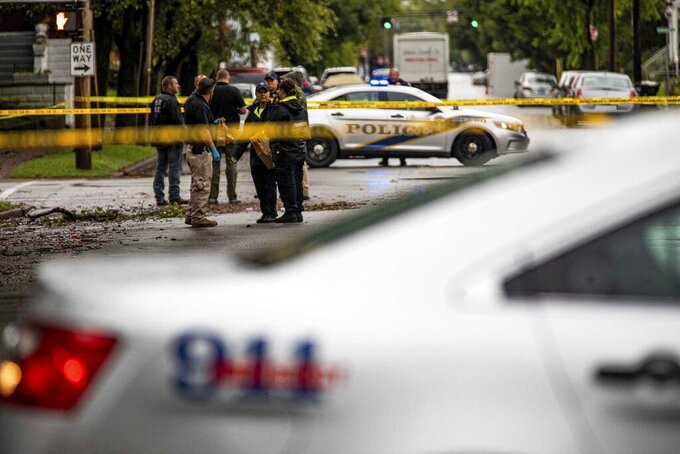 Jeff Faughender, ASSOCIATED PRESS
LMPD investigators stand at the corner of Dr. W.J. Hodge and W. Chestnut streets in Louisville's Russell neighborhood after a teenage boy was fatally shot and another wounded in a drive-by shooting at a bus stop Wednesday morning. Sept. 22, 2021. (Jeff Faughender/Courier Journal via AP)

A third child was injured as the youths waited at the bus stop just west of downtown Louisville, authorities said without elaborating on what caused those injuries.

A person in a car drove by the bus stop around 6:30 a.m. and shot at the waiting students, some of whom were not harmed, Louisville Metro Police Maj. Shannon Lauder said at a news conference. No suspects were in custody as of Wednesday afternoon.

Police released a photo of a dark gray Jeep SUV on social media and sought the public's help in finding it. The vehicle had Illinois license tags, with the plate number BD91644.

“And a teen that should be at school today will not be there, and will never be there again,” he said.

Fischer said the fatal shooting was the city’s 145th homicide this year.

Police were working with the FBI and other agencies in investigating the shooting, Chief Erika Shields said. She suggested the shooting could be gang-related.

“The reality of it is, we are dealing with very difficult gang issues in this city,” Shields said. “Many of our gang members go to these schools.” She said she did not believe the victim was involved with gangs.

The bus stop, not far from the city's downtown, was for students of Eastern High School.

Jefferson County Schools Superintendent Marty Pollio called the incident “one of the most difficult mornings of my career.” He said support is being provided to students and teachers at the school.

The bus arrived shortly after the shooting, school officials said.

Maj. Lauder said Louisville Police is “going to throw all of our resources at finding out who did this.”