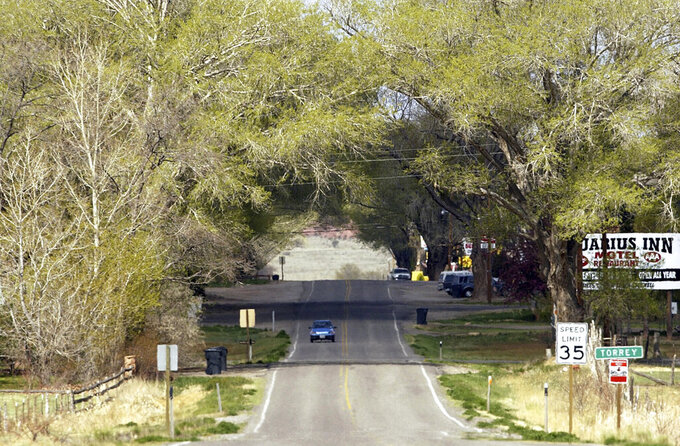 Francisco Kjolseth, ASSOCIATED PRESS
Main Street in Torrey in Wayne County, Utah, is shown in this undated photo from 2003. Newly released census figures show that adults in rural Wayne County grew more as a share of the population than anywhere else in Utah over the past decade. (Francisco Kjolseth/The Salt Lake Tribune via AP)

SALT LAKE CITY (AP) — While most of the world was on pandemic lockdown last year, Lisa Jeppson and her husband put more than 2,000 miles on their side-by-side ATV exploring the natural wonders of Wayne County.

The striking landscapes — the county includes parts of Capitol Reef and Canyonlands national parks — are part of why the couple decided to leave Draper about five years ago and move into a home in Loa for their retirement years, the Salt Lake Tribune reported.

The lifestyle reminds her of growing up in the Salt Lake Valley, when the county’s cities hadn’t yet run together and open farmland still stretched between Midvale and Murray.

They’re what longtime Wayne County residents call “move-ins,” Jeppson said, part of a wave of retirees drawn to the area’s natural riches and proximity to two national parks. As social director for the Wayne County Senior Citizens center, she’s in a position to meet the newcomers who are part of this trend.

Around the time she arrived in the county, the senior center was doing little more than having a once-a-month lunch, she said. Now, it’s hosting movies, going out on group all-terrain vehicle rides and coming together for “paint and soup days.”

While Jeppson loves living in the community, she knows that neighbors who aren’t of retirement age have a different experience — and sometimes struggle in a place where good-paying jobs are scarce and entertainment options limited.

“There’s nothing to keep the young people here,” she said. “There’s no bowling alleys, there’s no arcades. ... We have one movie theater, and it only shows movies on Fridays and Saturdays.”

Some of these younger families end up leaving for a more urban life or for work opportunities. Those departures, combined with the arrival of older residents, has meant the presence of children and teens is waning in this rural community.

Newly released census figures show that adults in Wayne County grew more as a share of the population than anywhere else in Utah over the past decade, increasing from 70% in 2010 to 78% in 2020. That’s consistent with an earlier finding from the University of Utah’s Kem C. Gardner Policy Institute, showing that Wayne County (population 2,486) is one of six Utah counties — most of them rural — where at least 1 in 5 residents is older than 64.

“Our greatest export as a county is, we export our kids,” Wayne County Commissioner Stanley Wood said. “And we bring retirees back in.”

Gov. Spencer Cox, who’s from sparsely populated Sanpete County, has pledged to invest in communities off the Wasatch Front and opened a rural office at Southern Utah University to signal commitment to the goal. His immediate predecessor, then-Gov. Gary Herbert, launched a 2017 initiative to create 25,000 jobs in rural counties and also supported an effort to encourage remote working in nonurban areas.

Wood, a longtime rancher and farmer, said one of his daughters teleworks from Wayne County, with the occasional business trip to California. But Jeppson said she’d like to see a major employer take advantage of the county’s fast internet service, too.

“We have 5G internet. It’s fabulous,” she said. “Why couldn’t a company … come here and have their people work at a call center?”

Tourism does bring cash into the county, but the work is largely seasonal, and Jeppson said some people have to hold down several of these lower-paying jobs to survive. Many others leave the county during the off-season, according to Wood.

The county once had thriving lumbering operations and seven sawmills, but that industry fizzled out, the county commissioner said. It also lost nearly 200 jobs in 2011 with the closure of several wilderness therapy and youth treatment programs owned by Aspen Education Group. At the time, that was the county’s biggest employer.

“It took a lot of younger families out,” Wood said of the program closures. “And a lot of kids out of the school.”

He said Hanksville Elementary, one of four schools in the county, has just 13 students this year.

The three other counties rounding out the top five are also rural: Kane, Daggett and Garfield.

Though this aging trend is particularly pronounced in certain remote areas, the entire state has gotten less youthful since the 2010 census. Twenty-nine percent of Utah’s population is under age 18, as of the 2020 census, compared to 31.5% in the previous decennial count.

Utah still has a higher percentage of kids and teens than any other state, but its traditionally first-in-the-nation fertility rate has dropped by 20% since 2009, according to the Gardner Institute. That’s pushed Utah below South Dakota and North Dakota in the ranking.

Mallory Bateman, a senior research analyst and the State Data Center coordinator at the Gardner Institute, noted that this trend varies across racial groups in Utah. While only 27% of whites in Utah are below age 18, about 35% of the minority population is in this younger category.