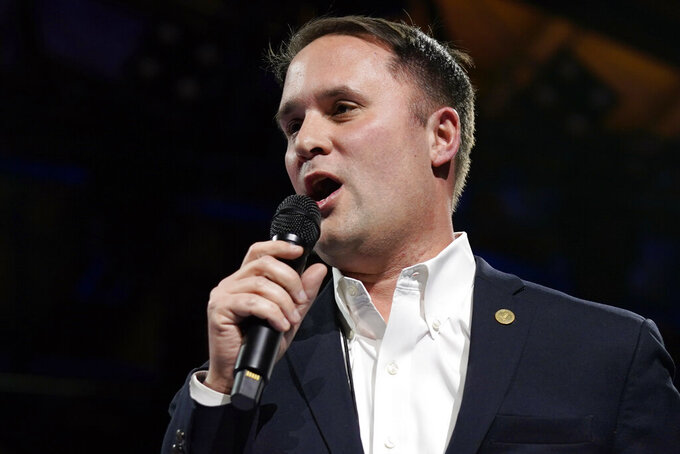 RICHMOND, Va. (AP) — The Virginia NAACP said Tuesday it was “deeply disappointed” after receiving “scant” information of substance in response to a wide-ranging public records request it made with the state's Republican attorney general about his new election integrity unit.

After expressing concerns that the unit could lend credence to election-fraud conspiracies, the civil rights group paid a deposit of more than $19,000 for a records request related to its organization, staffing, activities and other matters. It received documents from Attorney General Jason Miyares' office in early November and released them Tuesday.

The NAACP sought 17 detailed categories of information about the unit, according to the correspondence. While the responsive documents span hundreds of pages, scores are news clippings. In 11 of the 17 categories, including a request for “all records concerning the staffing” of the unit and another for records dealing with “procedures, policies, practices” and training materials, Miyares' office said it had no responsive documents.

The group also asked for any records identifying the number of convictions for crimes constituting “election cheating” in Virginia in each year since 2008; the attorney general's office said it had no such records.

“This unit is plainly a paper tiger, a public relations ploy to pander to the election deniers and conspiracy theorists who are the real force undermining public confidence in our elections," Robert Barnette Jr., president of the Virginia State Conference of the NAACP, said at a news conference.

Barnette reiterated the group's call to disband the unit.

Victoria LaCivita, Miyares' spokeswoman, said in an email that the NAACP was engaging in “groundless attacks that are offensive, ridiculous and without single shred of proof.” She noted that Miyares has repeatedly affirmed that there is no evidence of widespread election fraud in Virginia. She said the unit was fielding citizen complaints and handling lawsuits involving elections issues and irregularities — “exactly what it was created to do.”

“Due to the NAACP’s inappropriate and baseless attack, we continue to expect an apology on behalf of the hundreds of men and women at the Office of the Attorney General who work every day protecting the rights and freedoms of all Virginians,” she wrote.

The NAACP announced that it was pursuing the Freedom of Information Act request in October, after Miyares said in September he was forming the election integrity unit "to help restore confidence in our democratic process in the Commonwealth.”

The request pertained only to the attorney general's office. Election-related fraud cases often are investigated and prosecuted at the local level.

Some documents included talking points, correspondence with journalists and lawmakers, and emails from the unit's leader, Senior Assistant Attorney General Joshua Lief, to members of the public who wrote with either praise or criticism.

“I hear your concerns and I can assure you the mission of this unit is to call balls and strikes under the Code of Virginia. It is not to target one political party or group of voters,” Lief wrote in one email to a constituent.

Nearly 300 records were withheld under exemptions to the public records law, according to the attorney general's office.

“We were deeply disappointed in the scant amount of information related to a unit that the attorney general touted as essential,” Barnette said.

The NAACP pursued the request with the Lawyers’ Committee for Civil Rights Under Law, the Office of the General Counsel of the NAACP and the law firm Hogan Lovells. It ultimately paid just over $9,500 for the records. The attorney general's office provided a refund of nearly $10,000 after the review took less time than expected.

Barnette said Tuesday he believed the office charged what he characterized as exorbitant fees to try to dissuade the NAACP from its pursuit.

But LaCivita said fulfilling the request was a “massive undertaking” that required over 200 staff hours from over 20 employees and noted that the NAACP sought documents from a span of 15 years.

In an op-ed in The Washington Post in October, Miyares said the creation of the unit amounted to a restructuring of employees who were already working on election matters. He also wrote that there was no widespread fraud in Virginia or anywhere else during the 2020 election.

LaCivita said the unit had received complaints connected to this month’s elections, but she could not comment on whether any investigations had resulted.

Similar units in other states are looking into scattered complaints after the midterms but have provided no indication of systemic problems.