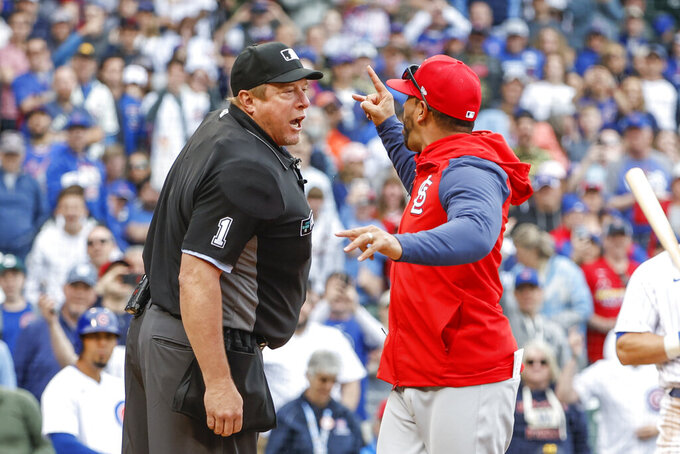 Tweets that Donovan sent as a teenager containing homophobic language surfaced during the doubleheader, and Donovan apologized after the nightcap.

Ian Happ had two doubles for the Cubs, who won the first game 6-1.

Donovan doubled after Michael Rucker (0-1) walked Nolan Arenado. Harrison Bader followed with an RBI single, and another run scored on a double play during a four-run 10th.

A Cardinals mistake kept them from taking the lead in the ninth. Edmundo Sosa missed third base attempting to score from second on Nolan Gorman’s single off David Robertson. Sosa had to return to third, and Paul Goldschmidt grounded out to end the threat.

“I’ll talk to him,” Cardinals manager Oliver Marmol said of Sosa. “He missed first, too, had to come back and get it. I think part of it is not trying to hit it with the foot that hurts.”

Donovan had three hits and Sosa added two in the nightcap for the Cardinals, who have won 11 of 16.

“He’s taking whatever’s given, using the whole field, just grinding, wearing the pitcher down, taking his walks when needed, using the middle of the field,” Marmol said about Donovan.

Jason Heyward doubled with two outs in the 10th off Cardinals closer Giovanny Gallegos (1-2) but was stranded when Nick Madrigal struck out.

Happ doubled with two outs off Gallegos in the bottom of the ninth. Gallegos intentionally walked Frank Schwindel before striking out Patrick Wisdom to send the game to extras.

St. Louis loaded the bases in the seventh with three walks by Mychal Givens, but Robertson took over and struck out Goldschmidt.

“Really nice job of taking the ball and giving us a chance to win the game,” Cubs manager David Ross said about Robertson, who pitched 2 1/3 innings. “We just couldn’t push that next run across.”

Right-hander Caleb Kilian allowed three runs and three hits in five innings for the Cubs in his major league debut. The right-hander — who was acquired last season in the trade that sent former MVP Kris Bryant to San Francisco — struck out six and walked two. He went 2-0 with a 2.06 ERA in nine starts with Triple-A Iowa.

“Best day of my life,” Kilian said. “To be able to debut at Wrigley, Saturday night against the Cardinals and it starts raining, tied game in the ninth, I couldn’t ask for anything better.”

Kilian retired his first nine batters before walking Tommy Edman and allowing a one-out single to Goldschmidt, who extended his on-base streak to 41 games. Arenado walked to load the bases, and Edman scored on a wild pitch to tie it. Donovan doubled for a 3-1 lead.

Goldschmidt’s 25-game hitting streak was snapped in the first game. He went 0 for 2 with a strikeout, a groundout and two walks, and fell one game short of his career-best hitting streak.

Christopher Morel singled and Willson Contreras doubled to put the Cubs ahead 1-0 in the nightcap. Morel had a career-high three hits in the first game.

Rookie Andre Pallante allowed a run and four hits in four innings for the Cardinals in his first start. He struck out two but walked four.

The Cubs left the bases loaded in the fourth when Andrelton Simmons grounded into a double play.

Swarmer (1-0) allowed two hits and an earned run in six innings, striking out six and walking two. He is the first Cub pitcher since Gene Lillard in 1939 to start his big league career by allowing one run or fewer in consecutive starts of at least six innings.

The only other active player with at least 2,500 major league appearances is Detroit Tigers first baseman Miguel Cabrera.

Johan Oviedo (0-1) allowed three earned runs in five innings in his first start this season. He dropped to 0-9 in his career as a starter.

Twitter users directed Donovan’s tweets to the attention of reporters, including at least one that used an anti-gay slur. Donovan’s Twitter account was deleted shortly after the second game.

The flagged tweets were sent in 2011 and 2013, and the 25-year-old Donovan said they were part of “playful banter” with a friend.

“I take full responsibility,” Donovan said. “It was something I sent out a long time ago. I’m truly sorry to anyone I may have offended. Anyone that knows me as a person knows I see everyone the same, and I do not condone that type of behavior or anything.

“If I’ve offended you, I truly apologize. Hopefully, I can do my part to show you that’s not who I am.”

Scott Effross escaped a bases-loaded jam in the seventh of the first game by fanning Edman with a called strike.

Marmol was ejected for the first time in his career after arguing with plate umpire Bruce Dreckman. Marmol appeared to mimic the ejection motion toward Dreckman during a heated exchange.

The Cardinals recalled RHP Jake Woodford from Triple-A Memphis as the 27th man.

The Cubs optioned RHP Mark Leiter Jr. to Iowa and designated LHP Conner Menez for assignment to make room for Kilian. RHP Anderson Espinoza was added as the 27th man. He allowed two earned runs in four innings in his major league debut Monday against Milwaukee.

Cardinals: Dickerson did not play in the second game. ... RHP Jack Flaherty (right shoulder) is expected to make a rehab start Sunday with Double-A Springfield.