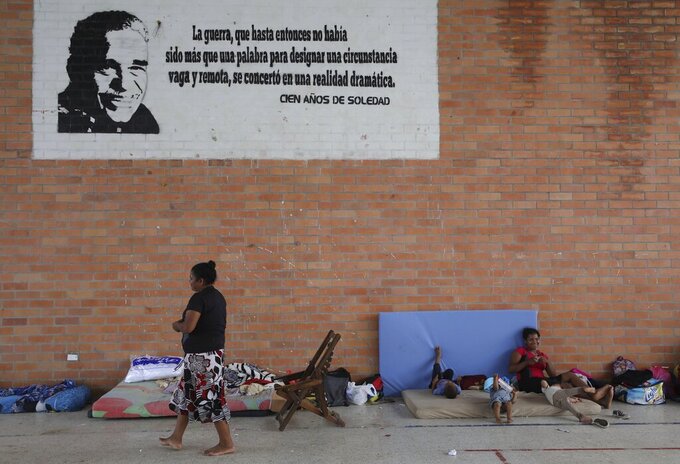 Fernando Vergara, ASSOCIATED PRESS
Venezuelans rest at a community center being used as a shelter in Arauquita, Colombia, Thursday, March 25, 2021, on the border with Venezuela. Thousands of Venezuelans are seeking shelter in Colombia this week following clashes between Venezuela's military and a Colombian armed group in a community along the nations' shared border. (AP Photo/Fernando Vergara)

ARAUQUITA, Colombia (AP) — Clashes that began over the weekend between Venezuela’s military and a Colombian armed group in a community along the nations’ shared border have continued, prompting more Venezuelans to seek refuge in a nearby Colombian community, international monitoring groups said Thursday.

Colombian officials said more than 3,900 people have now moved from Venezuela to northeast Colombia, about 800 more than Wednesday. The children and adults are in eight shelters set up to host them.

“It was reported that families continue to flee across the border in search of safety as the violence in the area has not completely stopped,” said Dominika Arseniuk, the Norwegian Refugee Council’s Country Director in Colombia. “People we have spoken with are terrified and fear for their lives.”

Venezuelan Defense Minister Gen. Vladimir Padrino López confirmed on Monday in a statement that the clashes began Sunday. He said they resulted in the arrests of 32 people, the destruction of six camps and the seizure of weapons, but he did not name the Colombian armed group involved.

Human Rights Watch told The Associated Press the armed group involved is the 10th Front, which is made up of dissidents of the Revolutionary Armed Forces of Colombia, known by its Spanish acronym FARC. The fighting is taking place in in the border state of Apure, Venezuela.

“We have received credible complaints of abuses by the Venezuelan security forces against the population in Apure, including violent raids without a warrant, possible arbitrary detentions and theft of property from the population,” said José Miguel Vivanco, the organization’s director for the Americas.

A peace deal between the Colombian government and the FARC in 2016 ended five decades of war. But the group has suffered deep divisions, with some of its members joining mainstream leftist movements and others giving up on the peace process and returning to arms.

In the Colombian municipality of Arauquita, where the displaced people have taken refuge, a humanitarian crisis has developed, according to local and national officials. One shelter is hosting about 400 people, but despite the addition of 13 tents, some families have had to sleep on small mattresses set up on the ground and on the stands of a space normally used for sporting events.

Marta Orozco, a Venezuelan, said she fled her home in Apure because houses were being looted.

“The one that is entering (the homes) is the government. It is looting and beating people ... the government of Venezuela,” Orozco, 38, said.

The Colombian government has repeatedly accused Venezuela of harboring members of the National Liberation Army as well as FARC dissidents. Colombia’s Ministry of Foreign Affairs expressed its concern for the civilian population and called on the international community “to join in assisting in the face of this humanitarian crisis.”

Colombia and Venezuela share about 1,370 miles (2,200 kilometers) of border but have not had diplomatic relations since February 2019 following the decision of President Nicolás Maduro to expel Colombian diplomats. Colombia President Iván Duque does not recognize Maduro as Venezuela’s legitimate president and instead supports opposition leader Juan Guaidó.

The Colombian government on Wednesday reinforced the military presence on the border with Venezuela in the Arauca area with about 2,000 soldiers, according to the Defense Ministry.