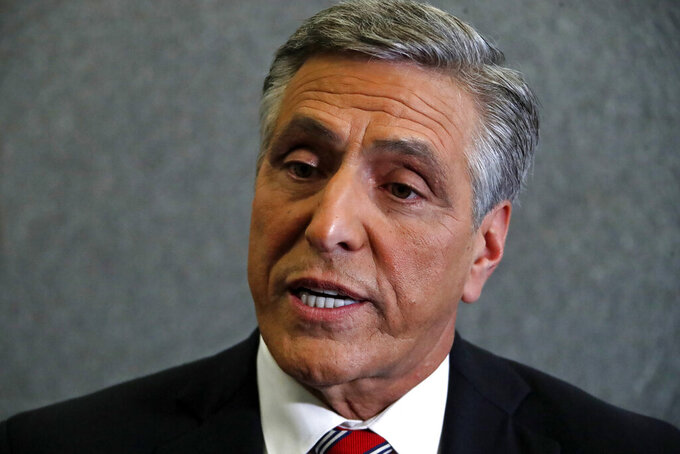 Gene J. Puskar, ASSOCIATED PRESS
FILE - This Oct. 26, 2018 file photo shows Lou Barletta in the studio of KDKA-TV in Pittsburgh. Barletta, a former congressman seeking the Republican nomination for governor of Pennsylvania, said on Twitter that he was proud to sign a pledge from a conservative anti-tax Washington-based group that commits him to oppose tax increases. (AP Photo/Gene J. Puskar, File)

HARRISBURG, Pa. (AP) — Lou Barletta, the former congressman seeking the Republican nomination for governor of Pennsylvania, has signed a pledge from a conservative anti-tax Washington-based group that commits him to oppose tax increases.

The pledge, sponsored by Americans for Tax Reform, commits the signer to the state's taxpayers to “oppose and veto any and all efforts to increase taxes.”

Barletta, of Hazleton in northeastern Pennsylvania, said on Twitter on Friday that he was proud to sign it. He is the first one in a crowded GOP field to do so.

Barletta did not immediately return a phone call about it Monday, but his campaign said in a statement that “the last thing Pennsylvanians need is the government taking more of their hard-earned money.”

“Lou Barletta has always supported lower taxes to help families and employers make their own decisions and that will continue when he’s governor,” his campaign said.

Barletta signed it Sept. 6, according to Americans for Tax Reform.

The last Republican governor of Pennsylvania, Tom Corbett, also signed the pledge. Corbett, then the state attorney general, did so in February 2010 when he was running in a contested primary against a conservative state lawmaker.

Corbett’s pledge became a defining issue for him as governor and a constant presence in the Legislature’s debates on fiscal and policy matters.

Despite his general reluctance to increase the financial burden on taxpayers, Corbett ultimately signed legislation raising taxes on motor fuels and scores of fees on items including birth certificates, court filings and hauling permits. Corbett also signed a major oil and gas drilling law in 2012 that allowed counties to impose an “impact fee” on new Marcellus Shale wells.

During his unsuccessful campaign for a second term in 2014, Corbett said he believed he had fulfilled the spirit of the pledge.

Asked whether he regretted making the pledge, he said he couldn’t have foreseen the demands on the state for new revenue.

Gov. Tom Wolf, the Democrat who beat Corbett, is constitutionally barred from serving a third term. Attorney General Josh Shapiro, a Democrat, has said he will seek his party's nomination next year, but has yet to formally declare his candidacy.

At an unrelated event Monday, Shapiro declined to discuss the governor's race.

The crowded field for the GOP nomination in next May’s primary election grew with the entry of Guy Ciarrocchi, who just stepped down as president and CEO of the Chester County Chamber of Business and Industry.

Barletta, a former Hazleton mayor and four-term member of Congress, has far more electoral experience than any other potential challenger for the GOP nomination. That includes a statewide campaign as the Republican nominee in his 2018 loss to Democratic U.S. Sen. Bob Casey.