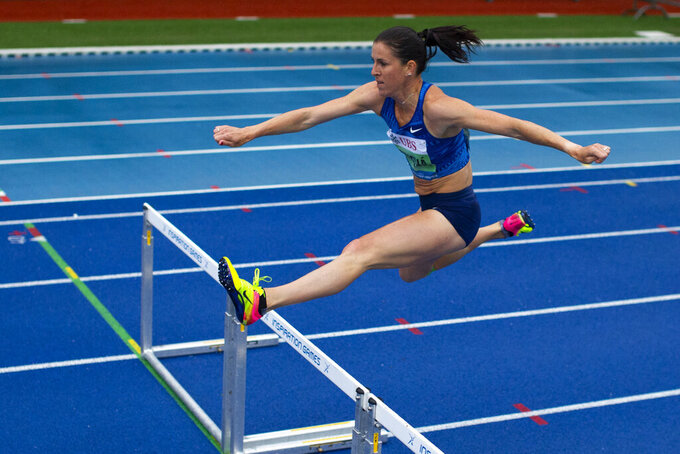 Peter Dejong, ASSOCIATED PRESS
FILE - In this file photo dated Thursday, July 9, 2020, Zuzana Hejnova of the Czech Republic competes in the 300 meter hurdles women in the Weltklasse track meet in Papendal, outside Arnhem, Netherlands. Two-time world champion in the women’s 400 hurdles Zuzana Hejnova has pulled out of the upcoming Tokyo Olympics due to an Achilles tendon injury, she announced Thursday July 15, 2021. (AP Photo/Peter Dejong, FILE)

PRAGUE (AP) — Zuzana Hejnova, a two-time world champion in the 400-meter hurdles, won't compete in the Tokyo Olympics due to an Achilles tendon injury, she said Thursday.

Hejnova's back and Achilles problems prevented her from competing this season and she won’t fully recover for the Tokyo Games, which open in eight days.

“I feel much better now but to represent your country at the Olympics, you need to be in top form,” Hejnova said.

Hejnova had planned to retire after the Tokyo Games, originally scheduled for 2020, but she still had hoped to compete despite the one-year postponement because of coronavirus pandemic.

She said Thursday she now plans to retire.

Hejnova won gold at the world championships in 2013 and 2015. She also took bronze at the 2012 London Olympics and finished fourth at the 2016 Rio de Janeiro Games.