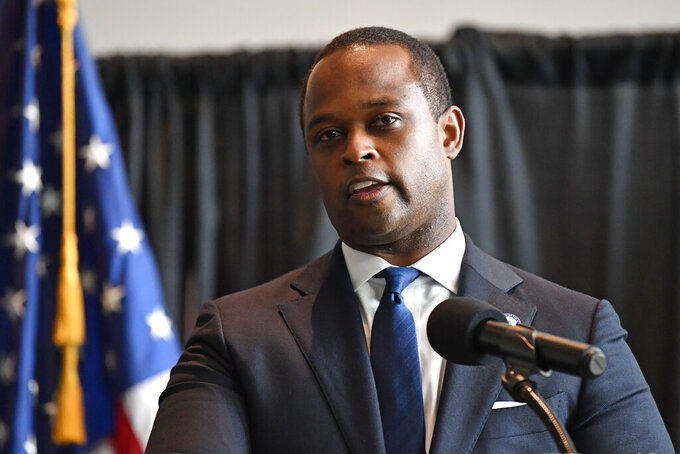 FRANKFORT, Ky. (AP) — The Kentucky attorney general who investigated the Breonna Taylor case responded to months of blistering criticism by saying the decision not to charge any police officers in her death was “ultimately” in the grand jury’s hands, though some jurors have complained they were limited in what crimes they could consider.

Republican Attorney General Daniel Cameron, speaking to The Associated Press on Thursday, said he hopes people recognize that his role was to “look at the facts as they are, and not how a particular narrative is being driven by particular people.”

Reflecting on a case that thrust him into the national spotlight, Cameron said: “I’ve said this until I’m blue in the face that what happened to Miss Taylor was a tragedy, unequivocally a tragedy."

Cameron, Kentucky's first Black attorney general, said he was proud of the work by his team, which spent months poring over evidence and presented the case to the grand jury. The outcome, though, was in the hands of the grand jury, he said.

“The prosecutors made a recommendation to the grand jury and those members ultimately decided to pursue that particular recommendation and indict one of the officers,” Cameron said in a sit-down interview with The AP.

Three jurors on the 12-member grand jury later came forward to say Cameron’s team limited their scope and misled them about what charges they could consider against the officers. Cameron on Thursday didn't criticize the three grand jurors — saying they can “speak for themselves” — as he attempted to deflect their stinging review of how the case was presented.

“No one is ever going to be 100% in agreement with the decisions or recommendations that are made," he said. “But from our point of view, our responsibility was to the facts and to the law.”

Taylor was fatally shot by police in her apartment on March 13, 2020. Her death and the killing of George Floyd sparked massive nationwide racial justice protests in the spring and summer of that year. The 26-year-old Black woman was an emergency medical worker who had settled in for the night when police busted through her door with a narcotics warrant.

One of the Louisville police officers was charged for wantonly shooting into the apartment of Taylor’s neighbor. None of the officers who fired their guns were charged directly in her death. The fallout was swift and furious, with Cameron at the center of criticism from protesters and Taylor’s family.

Cameron spoke at a widely viewed press conference when the charges were announced in September. He said at the time the grand jury “agreed” that homicide charges were not warranted against the officers. That prompted some grand jury members to come forward to dispute his accounting of the closed-door proceedings.

Asked why the grand jury review didn't lead to more serious charges for a trial jury to decide, Cameron said prosecutors have “ethical obligations to bring forward recommendations on which they think they can prove in front of a jury in a trial. That was what our prosecutors believed was appropriate.”

“The officers attempted to enter the home, they were fired upon and returned fire,” he said. “Again, it was a tragedy that in the return fire, Miss Taylor was hit and died. That is a tragedy. But again, our team had to look at the facts and apply that to the law as it exists.”

The grand jury charged one officer, Brett Hankison, with wanton endangerment. Hankison and another officer, Myles Cosgrove, who shot 16 times into Taylor’s apartment, were later fired by the department. The third officer, Jonathan Mattingly, who was shot in the leg by Taylor’s boyfriend, retired in June.

Jurors spoke out, with one saying the officers “got a slap on the wrist.” They each said they wanted Taylor’s family to know they did not agree with the lack of charges against the officers.

Cameron's investigation did not look into the procurement of the warrant that the officers used to enter the home. Federal investigators with the Department of Justice are reviewing the warrant.

Cameron, a conservative Republican, spoke in personal terms about the criticism he received from the Black community about his role in the Taylor case.

“Sadly, those aren’t new to me," he said. "I’ve been called an Uncle Tom. I’ve been called a race traitor. I’ve been called all assortment of names. When you are a Black person, male or female, and you identify as Republican, watch out. Because those are the sorts of things that are going to come your way, regardless of whether you make a significant decision or not.”