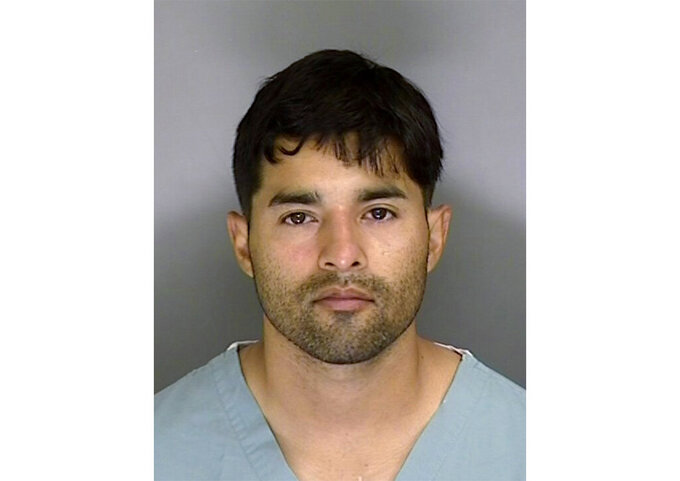 OAKLAND, Calif. (AP) — A former U.S. Air Force staff sergeant and alleged member of the “boogaloo” extremist movement was sentenced to 41 years in prison Friday for the fatal shooting of a federal security officer in the San Francisco Bay Area amid large 2020 protests against police brutality.

Steven Carrillo, 33, had pleaded guilty earlier this year to a federal murder charge in the killing of David Patrick Underwood and to the attempted murder of Underwood’s colleague after federal prosecutors agreed not to seek the death penalty.

The men were shot on May 29, 2020, while they stood in front of a federal building in Oakland as hundreds marched on the streets.

In February, Carrillo admitted to posting messages on Facebook a day before the shooting asking anyone if they were “down to boog” and saying he was ready to act and not just talk. He also admitted firing 19 rounds from a homemade AR-15 rifle from the back of a white van being driven by a man he connected with online.

“I aligned myself with the anti-government movement and wanted to carry out violent acts against federal law enforcement officers in particular,” Carrillo said then.

Prosecutors on Jan. 31 said they would not seek the death penalty, but U.S. District Judge Yvonne Gonzalez Rogers said at a February hearing she was not convinced that a 41-year-sentence agreed to by prosecutors and defense lawyers was sufficient for Carrillo’s crimes.

Gonzalez Rogers had warned that she could reject the plea agreement if she didn’t feel prosecutors and defense lawyers did enough to justify the sentence.

On Friday, Gonzalez Rogers sentenced Carrillo to the 41-year term, a lifetime of supervised release and an amount of restitution to be determined at a later date, a court official said. She spoke directly to Underwood's family, explaining why she had accepted the agreement.

“I believe there is evil in this world. … But from what I read and studied as I tried to make and find logic in the illogical, as I have looked for answers, as you are frustrated and angry that such a tragedy could happen, what I can tell you is that I do not see evil in Mr. Carrillo," the judge was quoted as saying by the Mercury News.

“I know (the plea agreement) won’t make you happy but I need you to trust me. I would not accept it if I saw no measure of redemption,” she said. “He will spend virtually the rest of his life in prison in a cell that is typically no bigger than 10′ by 6′ — not even bigger than that jury box.”

Prosecutors have said Carrillo, of Santa Cruz, had ties to the “boogaloo” movement — a concept embraced by a loose network of gun enthusiasts and militia-style extremists. Experts say the group started in alt-right culture on the internet with the belief that there is an impending U.S. civil war.

Authorities accused Carrillo of fatally shooting Underwood after spraying a guard shack he was in with bullets.

Prosecutors said Robert Alvin Justus Jr., of Millbrae, drove the van. He faces federal charges of murder and attempted murder in the case.

The pair is accused of driving to Oakland and taking advantage of the distraction afforded by people marching through the city’s downtown to protest George Floyd’s killing by a police officer in Minneapolis.

Carrillo was arrested a week after the shooting in Oakland after he allegedly ambushed sheriff’s deputies in Santa Cruz County who were responding to a report of a van containing firearms and bomb-making materials. Sgt. Damon Gutzwiller, 38, was killed and several other law enforcement officials were wounded, according to authorities and court records.

Prosecutors in Santa Cruz charged Carrillo with a slew of felonies, including murder and attempted murder in connection to that killing.

Carrillo has pleaded not guilty to Gutzwiller’s killing.