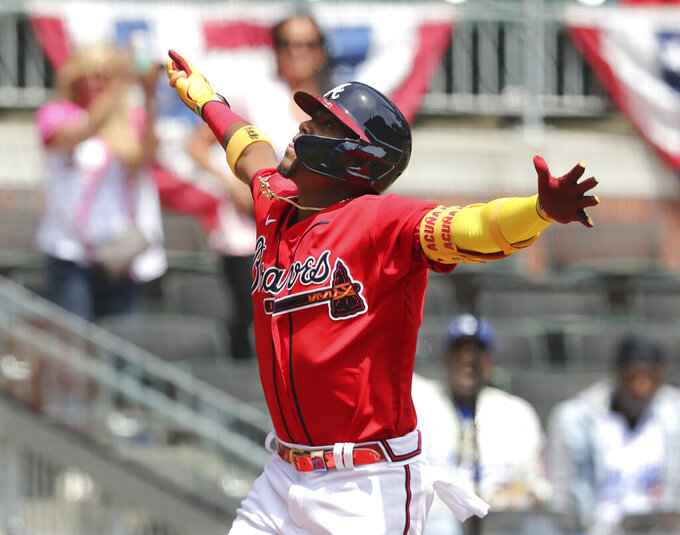 Curtis Compton, ASSOCIATED PRESS
Atlanta Braves' Ronald Acuna reacts on his way home after hitting a two-run home run against the Miami Marlins during the fifth inning of a baseball game Thursday, April 15, 2021, in Atlanta. (Curtis Compton/Atlanta Journal-Constitution via AP)

NEW YORK (AP) — The Atlanta Braves say Ronald Acuña Jr. had an MRI on Monday that revealed a mild abdominal strain and that the star outfielder is day to day heading into a series at Yankee Stadium beginning Tuesday.

Acuña was injured in the fourth inning of Atlanta's 13-4 win over the Chicago Cubs on Sunday night. He led off the fourth inning with a walk, and pitcher Kyle Hendricks threw over a couple of times while he was on first. It looked as if Acuña did something to his midsection on a dive back to the bag.

The All-Star was checked by a trainer while he was on second, but he stayed in. He got up slowly after diving home to score on Travis d’Arnaud’s sacrifice fly, and then was replaced in the field in the bottom half.

Acuña is off to a terrific start this year, batting .419 with seven homers and 16 RBIs in 16 games. The outfielder also has scored a major league-high 21 runs. He was honored as the National League's player of the week Monday.

The reigning NL East champions have been hit hard by injuries during a rough start to the season. Pitchers Max Fried, Drew Smyly and Sean Newcomb and outfielders Cristian Pache and Ender Inciarte have been placed on the 10-day IL since Wednesday.

Atlanta plays the Yankees in the Bronx on Tuesday and Wednesday before opening a home series against the Arizona Diamondbacks on Friday.