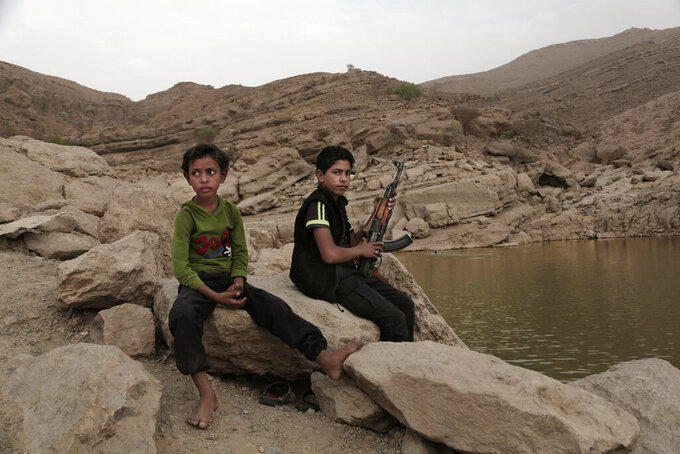 Nariman El-Mofty, ASSOCIATED PRESS
FILE - A 17 year-old boy holds his weapon at the High dam in Marib, Yemen, July 30, 2018. emen’s Houthi rebels continue to recruit children into their military ranks to fight in the country’s civil war, despite an agreement with the U.N. in April 2022, to halt the practice. Two Houthi officials acknowledged to the Associated Press that the rebels have recruited several hundred children, some as young as 10, in the past two months. (AP Photo/Nariman El-Mofty, File)

CAIRO (AP) — Yemen's Houthi rebels are still recruiting children into their military ranks to fight in the country’s grinding civil war, despite an agreement with the United Nations in April to halt the practice, Houthi officials, aid workers and residents told The Associated Press.

Two Houthi officials told the AP that the rebels recruited several hundred children, including those as young as 10 years over the past two months. They have been deployed to front lines as part of a buildup of forces taking place during a U.N.-brokered truce, which has held since April, one official said.

The officials, both hard-liners within the Houthi movement, said they see nothing wrong with the practice, arguing that boys from 10 or 12 are considered men.

“Those are not children. They are true men, who should defend their nation against the Saudi, American aggression, and defend the Islamic nation,” one of them said. The two spoke on condition of anonymity to avoid friction with other Houthi leaders.

The Houthis have used what they call “summer camps” to disseminate their religious ideology and to recruit boys to fight. Such camps take place in schools and mosques around the Houthi-held part of Yemen, which encompasses the north and center of the country and the capital, Sanaa.

Yemen’s conflict erupted in 2014 when the Houthis descended from their northern enclave and took over Sanaa, forcing the internationally recognized government to flee to the south. A Saudi-led coalition entered the war in early 2015 to try to restore the government to power, waging a destructive air campaign and arming anti-Houthi forces.

The war has killed more than 150,000 people, including more than 14,500 civilians and has plunged the country into near-famine, creating one of the world’s worst humanitarian crises.

Child soldiers have been involved in Yemen's war for years. Nearly 2,000 Houthi-recruited children were killed on the battlefield between January 2020 and May 2021, according to U.N. experts. Pro-government forces have also used child fighters but to a much lesser degree and have taken greater measures to halt the practice, according to U.N. and aid officials.

Overall, the U.N. says over 10,200 children have been killed or maimed in the war, though it is unclear how many may have been combatants.

In April, the rebels signed what the U.N. children’s agency described as an “action plan” to end and prevent the practice. U.N. spokesperson Stephane Dujarric said the rebels committed to identifying children in their ranks and releasing them within six months.

UNICEF did not respond to requests for comment on the continued recruitment since, nor did spokesmen for the Houthi administration. The Houthis have in the past officially denied enlisting children to fight.

In early June, a high-ranking Houthi, Mohammed al-Bukhaiti, posted a video from a visit he paid to one of the camps in Dhamar province. It shows dozens of children in uniforms standing in a military-like formation and declaring allegiance to rebel movement’s top leader, Abdul-Malek al-Houthi.

“Soldiers of God,” they shout. “We are coming.”

Four aid workers with three international organizations operating in rebel-held areas said they observed intensified Houthi efforts to recruit children in recent weeks. The Houthis’ ranks have been thinned because of battlefield losses, especially during a nearly two-year battle for the crucial city of Marib.

The aid workers spoke on condition of anonymity, fearing for their safety, and said their groups could be barred from working in Houthi-held territory. They said the rebels have pressured families to send their children to camps where they learn how to handle weapons and plant mines, in return for services, including food rations from international organizations.

One aid worker who operates in remote northern areas described watching children as young as 10 manning checkpoints along the road, with AK-47s hanging on their shoulders. Others are sent to the front line. He said children have returned wounded from fighting at Marib.

Thousands of fighters were killed in the battle for government-held Marib. The Houthis' long attempt to capture it was finally stopped in late 2021, when government forces were bolstered by better-equipped fighters backed by the United Arab Emirates.

Abdel-Bari Taher, a Yemeni commentator and former head of the country’s Journalists’ Union, said that the Houthis are exploiting local customs to the children’s and society’s detriment. Having or carrying a weapon is a tradition deeply rooted in Yemen, especially in rural and mountainous communities, he said.

“It is a source of pride and kind of manhood for the boys,” he said.

Two residents in Amran province said Houthi representatives came to their homes in May and told them to prepare their children for camps at the end of the school year. The residents, who are farmers, spoke on condition of anonymity for fear of reprisals.

They said their five children, aged between 11 and 16, were taken in late May to a training center housed in a nearby school. One father said he was told that if he didn’t send his children, his family would no longer receive food rations.

The U.N. panel of experts said earlier this year that the Houthis have a system to indoctrinate child soldiers, including using humanitarian aid to pressure families.

Children are taken first to centers for a month or more of religious courses. There, they are told they are joining a holy war against Jews and Christians and Arab countries that have succumbed to Western influence. Seven-year-olds are taught weapons cleaning and how to dodge rockets, the experts found.