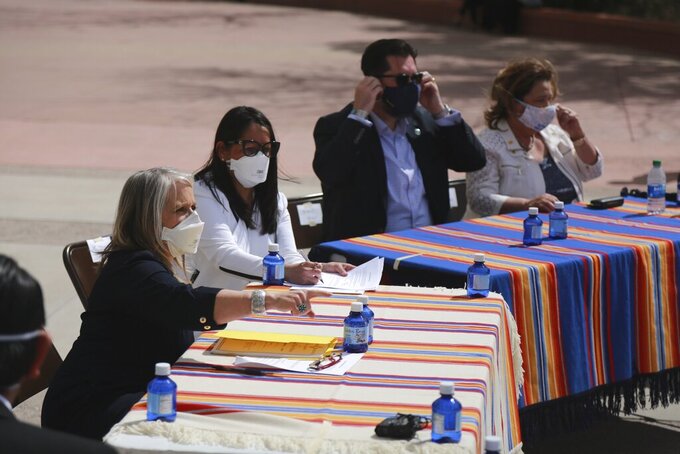 SANTA FE, N.M. (AP) — Gov. Michelle Lujan Grisham on Tuesday signed into law a measure that supporters are billing as the most progressive shift in the state’s tax structure in years.

It’s one of 100 bills the governor has signed so far this week ahead of a Friday deadline tied to the end of the legislative session that crafted them. Lujan Grisham has approved changes in healthcare, education and voting. Some of the bills she signed also expand or elevate the input from underrepresented groups to the administration.

The tax legislation expands rebates and tax credits for working families by increasing the benefits and broadening eligibility.

According to state data, nearly 200,000 New Mexicans claimed the Working Families Tax Credit in 2019. For this tax year and the next, the credit will increase from 17% to 20% of the federal Earned Income Tax Credit. It’s scheduled to go up again in 2023 to 25% of the federal credit.

As for the Low-Income Comprehensive Tax Rebate, the new law will increase that up to $730, depending on income and family size. The previous maximum was $450.

“We know these programs are among the most effective anti-poverty efforts we have,” the governor said. “Expanding them means we can lift more families out of poverty and strengthen the safety net for the most vulnerable people in our community."

Democratic Rep. Javier Martinez said that after decades of unfairness in the tax code and one of the toughest financial years on record, the legislation will infuse $100 million per year into low-income communities.

Here’s a look at other bills Lujan Grisham signed in the last 48 hours.

Another changes the composition of the state’s maternal mortality review committee by guaranteeing that the offices of Native American and African American affairs nominate two members each. Black and Indigenous women are three times more likely to die from childbirth, according to the U.S. Centers for Disease Control and Prevention.

The governor has already signed into law a measure that enshrines access to abortion. She is expected to sign another bill that creates a legal pathway for the terminally ill to die with assistance, on their own terms.

On Monday, Lujan Grisham signed high-profile education funding and anti-discrimination bills that protect the interests of Native American students and others.

She also signed bills to streamline transfers between community colleges and four-year colleges in New Mexico and let home school students qualify for state university subsidies without taking the GED.

On Tuesday, she signed into law a new sexual abuse and reporting requirement aimed at reducing abuse in schools. The measure follows a rise in liability costs related to abuse settlements following rapes committed by teachers.

Military families will find it easier to enroll their children in school next year, thanks to two bills that identify servicemember-friendly schools and reduce the burden of enrolling in a school when moving from out of state.

The results of the 2020 Census will lead to drawing new lines for electoral districts across the country. On Tuesday, Lujan Grisham signed a bill that creates a non-partisan redistricting committee to draw those lines.

The redistricting committee could still be overruled by the Democratically-controlled legislature. But some Republicans hailed the move as “a step in the right direction.”

The redistricting bill also requires the Secretary of State to produce and share publicly a database of lines drawn during the state’s redistricting. These district map “shapefiles,” which aren’t currently published, could form the backbone for maps made by election officials, political parties and issue advocates in 2022.

Judges will be able to access publicly funded campaigns in the next election, after Lujan Grisham signed what is likely the first bill in the nation to extend public financing to lower court races.

Another law will further protect access to polling places by residents of tribal nations and require that-minute consolidations or closures have the consent of tribal leaders. The measure enshrines the ability of tribes to close polling places to non-members during a public health emergency, as happened during the pandemic in November of last year.

Lujan Grisham has more time to consider signing a recent package of bills that legalize cannabis because they were passed by the Legislature during a separate legislative session.

She is expected to support the bills but could make tweaks by crossing words out using what's known as a line-item veto.