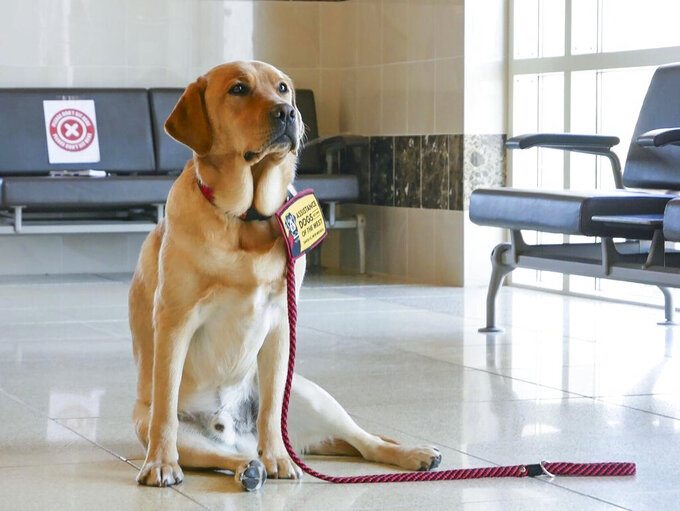 Matt Dahlseid, ASSOCIATED PRESS
This Sept. 9, 2021, photo, shows Judge, a 3-year-old yellow Lab, awaiting instructions while sitting in the hallway of the downtown courthouse in Santa Fe, N.M. He is the first courthouse facility dog to be employed by District Attorney Mary Carmack-Altwies’ office in a collaborative effort with Assistance Dogs of the West. (Matt Dahlseid/Santa Fe New Mexican via AP)

SANTA FE, N.M. (AP) — The new judge you may see in the First Judicial District courthouse downtown is about 2 feet tall, weighs less than 70 pounds and has expressive, loving eyes.

He also has four legs and a tail, which he lightly wags in a manner that says, “I’m here to help.”

Judge is a 3-year-old yellow Lab and the first courthouse facility dog to be employed by District Attorney Mary Carmack-Altwies’ office in a collaborative effort with Assistance Dogs of the West.

Yes, Judge is his real name, and neither he nor his role is a gimmick.

An assistance dog who underwent nearly two years of training, Judge has a serious job: His presence is meant to provide a sense of calm, support and love for adults and children who are victims or witnesses of traumatic and violent crimes as their cases move through the court system.

“It is the compassionate way of helping them go through this,” Aimee Brown, a trainer for Assistance Dogs of the West in Santa Fe, said of the courthouse facility dog program, one gaining popularity around the country.

The dogs, who often sit next to victims or witnesses as they testify in court, can give a child or adult who feels alone on the stand a sense of security, Brown told The Santa Fe New Mexican.

“You have a buddy on the stand who is not judgmental,” Brown said of the dogs. “They’re there for you.”

Long an organization that has trained dogs to give emotional and physical support for clients with disabilities, Assistance Dogs of the West began placing dogs in judicial districts in New Mexico, Arizona and California in 2010.

The organization also has placed dogs with police and fire departments to provide emotional, mental and physical support to vulnerable victims and others involved in stressful situations and cases.

To date, Assistance Dogs has trained and placed 35 dogs, including Judge, in courtrooms around New Mexico, said Linda Milanesi, CEO and president of the nonprofit. Her team puts incoming dogs in the program through temperament tests to see what job would best fit them.

A dog best suited to the job Judge earned must be patient and calm, plus display a connection to children and vulnerable people.

Biddability is another talent such dogs must display — the ability to work for others than just the trainer, so a courtroom handler like Irene Melendez, a victim advocate who handles Judge for the District Attorney’s Office, can guide Judge through the necessary paces in the courtroom environment.

Melendez went through weeks of training with Brown and Judge, learning the many commands — 90 in all — needed for the job. She said Judge will start working in courtrooms Monday.

Last week, he went through his first “meet and greet” with a child and her mother involved in an upcoming case.

The young girl got to pet and talk with Judge for about 45 minutes, she said.

“He has to build a relationship with them without me being there,” Melendez said of Judge.

If a judge allows it, Judge can sit in the witness box with a victim or witness who may be frightened — easing their anxiety as dogs can do when someone is simply petting them, Melendez said.

Otherwise, Judge will sit with Melendez within view of the witness.

Milanesi said dogs like Judge may work with a particular victim or witness for years, accompanying them through the early stages of collecting forensic evidence to pretrial interviews to the actual trial period.

The dog’s presence can help those victims and witnesses open up and talk about what they have experienced, Milanesi said.

Carmack-Altwies wrote in an email Friday that her office’s goal is to “center the safety of victims and witnesses, including emotional safety, and Judge is an important piece of that commitment. It is my hope that this is only the beginning of the program and that we will be able to build an even more robust system of support.”

Her office has agreed to abide by the Assistance Dogs of the West Dog’s Bill of Rights. That bill includes a promise to be aware of the dog’s perception of its work and the world, take action to reduce the dog’s stress, protect it from overwork, and find ways to help it relax and exercise.

Judge lives with Melendez and her other dog, Athena, in Albuquerque. He likes to tug, chew on a stuffed piglet and fetch balls when he is not working, she said.

Melendez, who said she responded to Carmack-Altwies’ call for staff members to take part in the courthouse dog program, said Judge is well suited to his new job.

She said no matter how you look at it, he’s bound to provide support in an environment that can be intimidating to some.

“A dog is a person’s best friend, whether you are a man, a woman or a child,” she said as Judge curled up under her legs, as he is trained to do with witnesses and victims in the courtroom.

Incidentally, the dog earned the name Judge long before he was headed into training for this job. Milanesi said his breeder named the pup Judge early on because “he was such a quiet puppy. He was sober as a judge.”