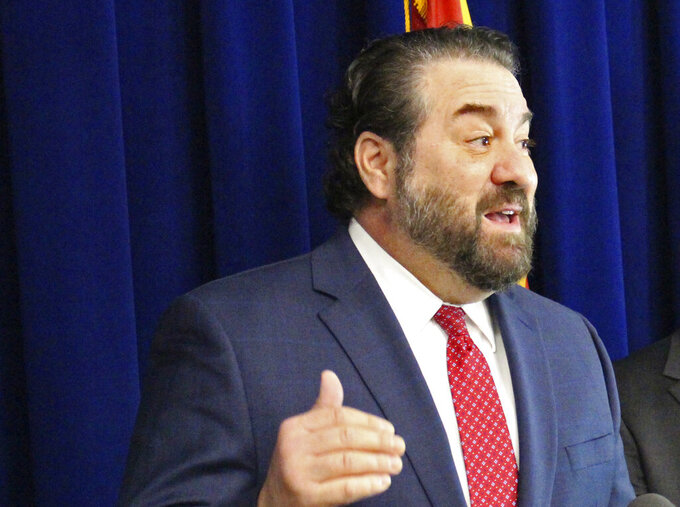 Democratic-led Tucson has repeatedly clashed with the state's Republican leadership over the city's aggressive efforts to control the spread of COVID-19. City Manager Michael Ortega said he put the mandate on hold while Tucson develops its legal position in response to the attorney general's decision.

Brnovich, who is running for U.S. Senate in a crowded Republican primary, cited a state law approved this summer that bans local governments from mandating vaccines for employees, which doesn't take effect until later this month. He also cited an August executive order signed by Republican Gov. Doug Ducey.

“Adhering to the rule of law in Arizona is not optional,” Katie Conner, a spokeswoman for Brnovich, told reporters during a conference call.

“This report reads more as a campaign speech filled with political commentary rather than a fact-based legal opinion,” the Democratic mayor said in a statement.

City officials are reviewing their options, Romero said, and the next step will have to be decided by her and City Council.

Tucson's policy requires employees to get a vaccine “as soon as reasonably possible” or submit a religious or medical exemption. Those who failed to get a first dose by Aug. 24 faced a five-day suspension from work without pay, but it was not immediately clear if the city disciplined anyone for missing the deadline.

The policy also allows the city to charge higher health insurance premiums for unvaccinated workers and require that they wear masks and be regularly tested.

A Pima County judge last month rejected a request by the Tucson police union to stop the vaccine mandate.

The state law blocking cities from enacting employee vaccine mandates was tucked into the state budget in late June, a common practice that is being challenged by Phoenix in a separate case arguing that slipping unrelated policies into the budget violates the Arizona Constitution.

Brnovich's decision comes under a 2016 law that allows any lawmaker to request the attorney general investigate whether a local ordinance or policy violates state laws.

It was passed amid GOP frustration with policies enacted by Democratic-led cities. If the attorney general decides the local policy conflicts with state law, a city or county has 30 days to repeal it or lose its share of state tax revenue, which is a significant chunk of local government budgets.

Tucson collected more than $64 million from state sales taxes in the year ending June 30, making up 11% of its general fund revenue.

The complaint about Tucson's vaccine mandate was filed by Sen. Kelly Townsend, a Mesa Republican who has been one of the Legislature's most vocal critics of pandemic restrictions.

Separately, a coalition of educators, parents and advocates has sued to try to undo new Arizona laws that restrict local COVID-19 requirements. A hearing is scheduled for Sept. 13.

At least 29 public school districts in Arizona have enacted their own mask requirements, accounting for more than 334,000 students and nearly 500 schools.

The Arizona Department of Health Services on Tuesday reported 1,982 new cases of COVID-19 and 54 deaths. About 56% of people in the state have received at least one dose of vaccine.

When Tucson officials adopted the vaccine mandate last month, they estimated about 1,000 city employees were unvaccinated. It was not immediately clear how many still haven't received shots.

Brnovich last month published a legal opinion saying businesses can require their employees and customers to be vaccinated against COVID-19 but must allow reasonable religious and medical exemptions. He said government agencies are different because the Legislature specifically prohibited them from adopting vaccine mandates.