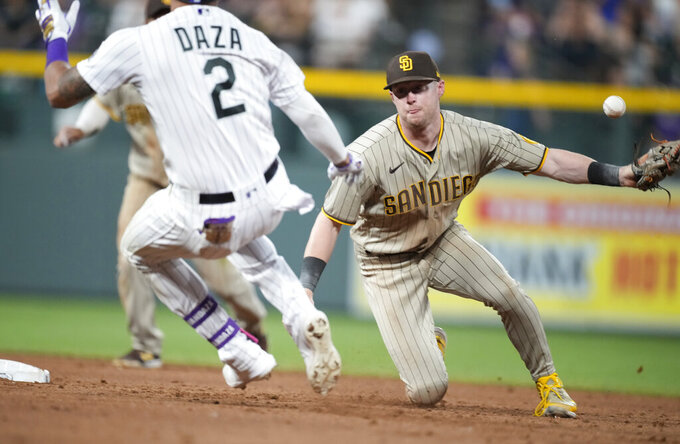 Charlie Blackmon added three hits for the Rockies, including a run-scoring triple and RBI single.

Trent Grisham homered for San Diego, which lost its eighth straight to the Rockies at Coors Field. It is San Diego’s longest road losing streak to the NL West-rival Rockies. The Padres were coming off a four-game series sweep of the Chicago Cubs and had won eight of their last 10.

Rookie MacKenzie Gore (4-3) had another rough outing against the Rockies. He went four-plus innings and was tagged for a career-high eight runs on nine hits, including both of Cron’s homers and Grichuk’s three-run drive in the bottom of the fourth that gave the Rockies a 6-0 lead. “He’s got a good arm. He’s got good stuff,” Rockies manager Bud Black said. “We took advantage of some balls that were up in the strike zone and we hit them.”

Gore also faced the Rockies in his last start in the second game of a doubleheader last Saturday, and failed to get out of the third inning, allowing six runs on a career low 2 1/3 innings pitched.

Kyle Freeland (3-5) pitched seven innings, six scoreless. The Padres tagged him for four runs in the fifth inning when Grisham led off with a homer. Jurickson Profar added a sacrifice fly and Manny Machado and Luke Voit hit consecutive RBI doubles as the Padres closed to within 6-4.

The Rockies added a pair of runs in the bottom of the fifth. Blackmon singled ahead of Cron’s second homer off Gore. It was Cron’s second multi-homer game of the season and the 15th of his career. Gore then walked Brendan Rodgers and was relieved by Mike Clevinger.

Cron’s second homer traveled 486 feet, landing on the concourse behind the left field bleachers. It was the longest home run of his career and the second-longest in the majors this season behind a 496-foot drive by Miami’s Jesús Sánchez on May 30 at Coors Field.

“I was just trying to put a good swing on a ball in the zone and fortunately enough, usually when I get them they go out, so I got to try to make that solid contact more often here and try to keep going,” Cron said.

Freeland welcomed the run support that the Rockies started early and built on over the course of the game.

“It’s great,” Freeland said. “It allows you and our starting pitchers to breathe a little easier and take a little bit of pressure off us to where we can go out there and really work, just fill up the strike zone and get quick outs."

Gore had allowed one home run this season, in his first start of the year April 15 against Atlanta, before giving up three in his latest start at Colorado. He has surrendered more runs in his last two starts against the Rockies (6 1/3 innings pitched, 14 earned runs) than his other starts combined (48.0 IP, 8 ER).

Padres: RHP Joe Musgrove has been placed on the COVID-19 injured list, and RHP Reiss Knehr was recalled from Triple-A El Paso to fill his roster spot. … In separate moves, RHP Clevinger was reinstated from the COVID-related list, OF Matt Beaty was transferred to the 60-day IL and RHP Kyle Tyler was optioned to El Paso.

Rockies: LHP Ty Blach, placed on the 15-day injured list a week ago with a left wrist strain, is being sent to Triple-A Albuquerque for a rehab assignment slated to begin Wednesday. He remains on track for a June 26 reinstatement from the IL. … OF Kris Bryant, who has battled a lower back injury for much of the season, is expected to begin a rehab assignment in the next day or two with Albuquerque. He could rejoin the Rockies as soon as next week during the team’s interleague series at Minnesota.