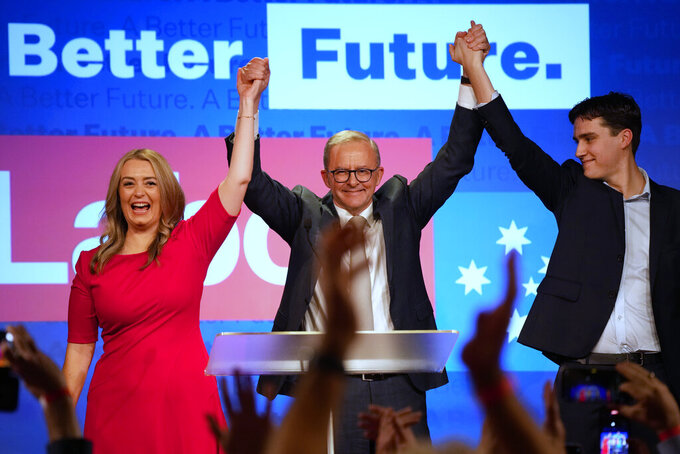 Rick Rycroft, ASSOCIATED PRESS
FILE - Labor Party leader Anthony Albanese, center, celebrates with his son Nathan, right, and his partner Jodie Haydon at a Labor Party event in Sydney, Australia, on May 22, 2022, after then Prime Minister Scott Morrison conceding defeat to Albanese in a federal election. Authorities are to declare the final seat on Wednesday, June 22, in a greener, more fragmented Australian Parliament following May 21 elections. (AP Photo/Rick Rycroft, File)

The Australian Electoral Commission on Wednesday declared the Victoria state seat of Cooper was the 77th won by Labor in the 151-seat House of Representatives where parties need to control a majority to form government.

The opposition conservative Liberal Party was later declared the winner of the Western Australia state seat of O’Connor.

Labor’s narrow majority means that the government will not have to negotiate with the opposition or unaligned lawmakers to get legislation through the lower chamber.

But that is not the case in the Senate, where Labor holds only 26 of the 76 seats.

If Labor got all 12 senators from the minor Greens party to support legislation, the government would only need to persuade one of the six remaining independent or unaligned legislators to reach a majority. The environmentally focused Greens held only nine seats in the previous Senate.

An early test will be when the government attempts to enshrine in legislation a new greenhouse gas reduction target on July 26 when the Parliament sits for the first time since the election.

Labor was elected on a pledge to reduce Australia’s emissions by 43% below 2005 levels by 2030. The government last week formally adopted the target, but enshrining it in law would make the task of changing the target more difficult for a future administration to achieve.

The conservative coalition went to the election last month with a less ambitious target of a reduction of 26% to 28% by the end of the decade. Opposition leader Peter Dutton has ruled out the 32 opposition senators supporting Labor's 43% target.

Greens leader Adam Bandt has said he will push the government to ban new coal mines and gas projects when that target legislation is negotiated. The Greens want Australian emissions reduced by 75% by 2030.

The major parties both lost seats to candidates who promised more action on climate change.

The Liberal Party lost six House seats that were considered some of their safest to so-called teal independents: a greener shade than the party’s traditional blue color.

The number of lawmakers in the House unaligned to major parties has burgeoned from seven in the last Parliament to 16 in the new Parliament, which some observers say suggests the years of majority government in Australia are numbered.