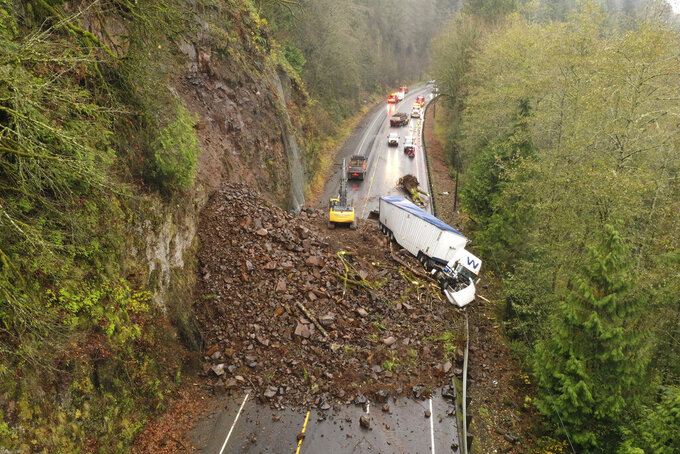 PORTLAND, Ore. (AP) — Crews are working to clear debris from a landslide that has closed part of a highway near Astoria in northwestern Oregon.

The Oregon Department of Transportation said it has removed a commercial truck that was caught in the rubble but that it still needs to be towed. The truck was the only vehicle damaged in the landslide, and no injuries were reported.

ODOT estimated the landslide on Tuesday night dumped 10 truckloads worth of rock and mud on U.S. 30 about 20 miles east of Astoria, The Oregonian reported. The road is a major east-west thoroughfare that connects Astoria to Portland.

The landslide has blocked more than 100 feet of roadway and was likely triggered by rain and strong winds, the agency said in a news release Thursday.

The slide of the rocky hillside occurred around 10:30 p.m. on Tuesday at milepost 74 east of Astoria. It has closed the road in both directions.

The agency's first goal is to make the area safe enough to reopen at least one lane with flaggers, according to its news release. The flaggers would direct traffic and have eastbound and westbound traffic take turns going through the section.

“The very soonest we can do this may be tomorrow,” ODOT spokesperson David House said in an email on Thursday, adding that it is “impossible to predict at this point” when it will be fully reopened.

Road work may continue through the weekend, according to the news release.

While crews have made progress on cleaning up debris, they still must repair pavement damage and remove two large sections of hillside that are on the verge of sliding. An ODOT geologist identified the sections, which would be big enough to block the entire highway again should they fall, the news release said.

Officials are asking people traveling between Portland and the northern coast to use alternate routes for at least the next few days.