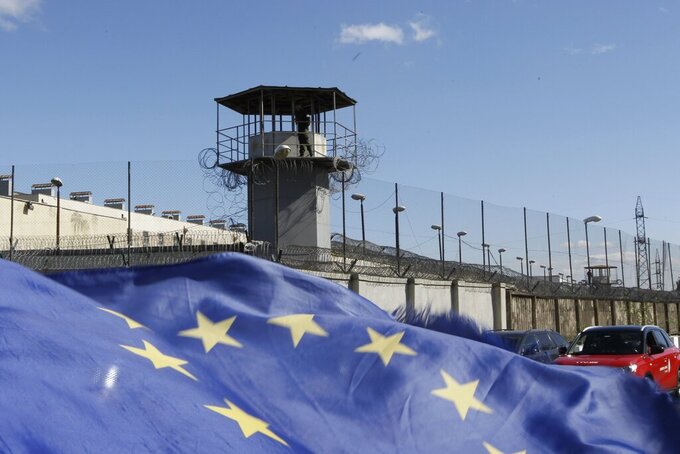 Shakh Aivazov, ASSOCIATED PRESS
A soldier stands guard on a prison's watchtower as Georgian opposition supporters of former president Mikheil Saakashvili hold an EU flag as they gather for a rally in his support in front of the prison where former president is being held, in Rustavi, about 20 km from the capital Tbilisi, Georgia, Monday, Oct. 4, 2021. Saakashvili was detained in Tbilisi on Saturday, Oct. 1, 2021. Georgia earlier declared Saakashvili wanted as a person convicted in absentia in several criminal cases and treated as a suspect in some others. Georgian authorities have warned repeatedly that he would be detained immediately once over the border. (AP Photo/Shakh Aivazov)

RUSTAVI, Georgia (AP) — Hundreds of demonstrators rallied Monday outside a prison where former Georgian President Mikheil Saakashvili has been held since his arrest after returning to the country last week.

Saakashvili, who left Georgia in 2014 and became a Ukrainian citizen, was later sentenced to up to six years in prison on abuse of power convictions handed down in absentia.

He came back to the country with the aim of galvanizing opposition as Georgia held nationwide municipal elections, and was arrested hours after posting videos Friday on social media announcing that he was back.

The United National Movement, which Saakashvili founded, is the most prominent political force opposing the governing Georgian Dream party.

Georgian Dream won 47% of the vote in the weekend municipal elections, well ahead of the 31% received by UNM.

“While Mikheil Saakashvili is in prison, each of us is a prisoner,” UNM chairman Nika Melia said at Monday's protest in Rustavi, about 25 kilometers (15 miles) south of the capital Tbilisi.