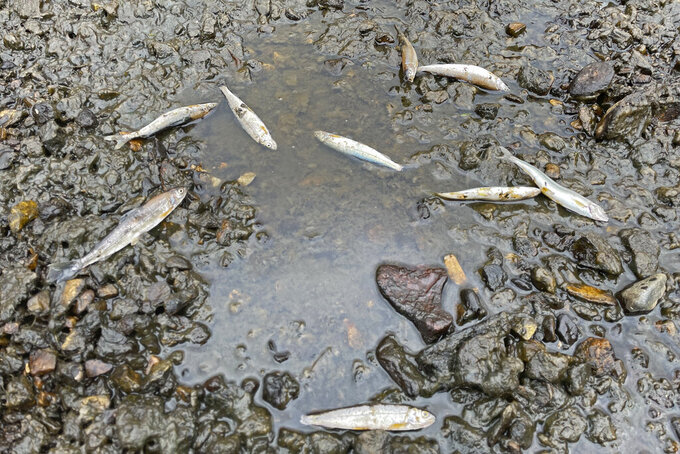 Chris Bianchi, ASSOCIATED PRESS
In this photo provided by Chris Bianchi, dead and dying fish are seen stranded along the Madison River on Nov. 30, 2021, south of Ennis, Mont. Water levels along the renowned river abruptly dropped due to a malfunctioning gate that controls water releases from Northwestern Energy's Hebgen Dam. (Chris Bianchi via AP)

BILLINGS, Mont. (AP) — Wildlife workers and volunteers scrambled Wednesday to save thousands of fish stranded by an abrupt drop in water levels along a Montana river that's renowned among anglers for its high-quality trout fishing.

A gate that lets water out of Hebgen Dam just west of Yellowstone National Park malfunctioned and caused flows into the Madison River to plummet early Tuesday morning, according to dam operator NorthWestern Energy.

That left side channels cut off from the main river and some areas with no water.

Photos from the scene showed dead trout and other fish lying on exposed rock beds that normally would be covered with water at this time of year.

More fish were at risk in the cut-off side channels and there was concern that exposed trout eggs could perish, fly fishing shop owner Kelly Galloup said.

Galloup said bigger trout likely moved to deeper pools as water levels dropped. But he expected an impact on fish born last year that were too small to escape the sudden drop in flows.

The Madison is a highly regarded “blue-ribbon” trout fishery that flows out of Yellowstone National Park in Wyoming and eventually feeds into the Missouri River. Hebgen dam is used to control water flows for downstream hydroelectric plants.

Volunteers on Tuesday began scooping fish out of the channels and returning them to the main stem of the river. That work continued Wednesday, and Montana Fish, Wildlife and Parks officials closed down fishing along the upper river until full flows can be restored.

“We scooped yesterday all day on the upper river,” Galloup said. “We’re just concentrating on the side channels, trying to rescue whatever we can find.”

More than 100 volunteers took part in the effort to save the stranded fish, using nets to catch thousands of them before they were transferred to the portion of the river that was still flowing, said Morgan Jacobsen, a spokesperson for Fish, Wildlife and Parks.

“The turnout was huge,” said Chris Bianchi, who works at Galloup's Slide Inn fly-fishing shop. “There were people everywhere that there was a side channel...The overall consensus was the (lower) section of the river was in a lot better shape than we thought it would be when we woke up.”

Most of the fish saved were sculpin with a small number of trout, Jacobsen said.

How much damage was inflicted on the fishery won’t be known until possibly next year, when biologists will be able to get a better gauge of how much the low water impacted trout spawning areas, Jacobsen said.

A component needed to fix the failed gate was en route to the site, with repair work anticipated to start Wednesday evening, said Jeremy Clotfelter, director of hydro operations for Northwestern Energy.

“We know what failed but we don't know how it failed or why it failed,” Clotfelter said. He add that it would take “a couple of hours” to install the replacement component.