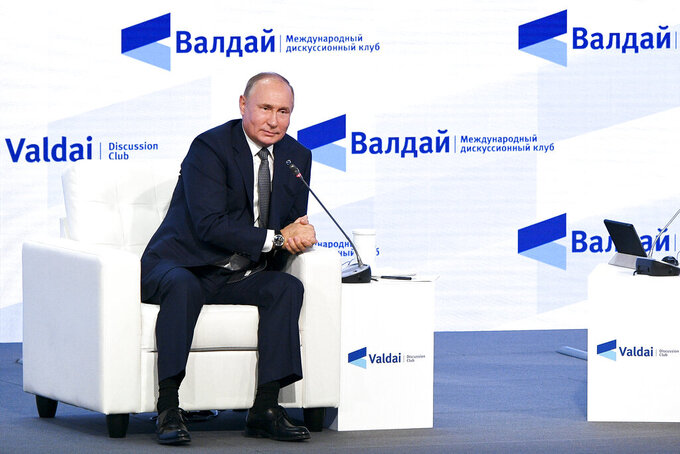 Maksim Blinov, ASSOCIATED PRESS
Russian President Vladimir Putin gestures attends the annual meeting of the Valdai Discussion Club in the Black Sea resort of Sochi, Russia, Thursday, Oct. 21, 2021. President Vladimir Putin has voiced consternation about Russians' hesitancy to get vaccinated and urged them to get the shots, adding: "Why wait for the illness and its grave consequences?" (Maksim Blinov, Sputnik, Kremlin Pool Photo via AP)

Speaking on a wide range of international and domestic policy issues during a conference of foreign policy experts, Putin argued that Russia already has increased gas supplies to Europe this year and could send more once the Nord Stream 2 pipeline is functioning.

He said one of the two links of the new pipeline already has been filled with gas as part of preparations for its launch, adding that supplies could start immediately after regulators give their approval.

“If the German regulator gives approval tomorrow, supplies of 17.5 billion cubic meters of gas will start the day after tomorrow,” Putin said.

Putin said the pipeline's second link will be filled with gas by the end of the year, to a total capacity of 55 billion cubic meters.

Earlier Thursday, European Union leaders met to discuss ways to ease the pain of soaring energy bills for consumers. European Commission President Ursula von der Leyen said Wednesday that with the 27-nation bloc importing 90% of its gas — much of it from strategic rival Russia — “this makes us vulnerable.”

Turning to other issues, Putin staunchly defended the law on “foreign agents” that has been used to designate some media, describing it as a tool to ward off foreign meddling in the country's affairs.

Opponents say it has been used to muzzle critical media outlets since the “foreign agent” stigma has strong pejorative connotations.

Responding to a question from Dmitry Muratov, who won the 2021 Nobel Peace Prize earlier this month for his work as editor of the independent Russian newspaper Novaya Gazeta, Putin congratulated him for the first time — but dismissed his criticism of the law.

Putin argued that the law is intended to inform the public about media outlets that receive foreign funds, while allowing them to continue their activities.

While defending the law, Putin promised, however, to look more closely into proposed amendments as Muratov asked.

Asked about his view of relations with Washington following his June summit with U.S. President Joe Biden in Geneva, Putin said Moscow and Washington have conducted consultations on arms control and cybersecurity in line with their agreement.

He said that "while we agreed just on a few issues, we are on the right track,” but added that there also have been some rollbacks on certain issues he didn't specify.

He noted that Russia would cooperate with Washington on fighting terrorism and “provide the necessary information to U.S. colleagues.”

Asked to comment on the situation of Afghanistan, Putin commended Biden for showing the courage to order American troops' pullback despite inevitable domestic criticism, and contested the view that the move had undermined the U.S. global power.

He charged that even though some U.S. allies may have been unnerved by the quick pullout from Afghanistan, in the long run “the country's attractiveness is determined by its economy and military might.”

“The U.S. president made the right decision to withdraw troops,” Putin said.

The Russian leader added that the international community “is getting close” to officially recognizing the Taliban as the new rulers of Afghanistan, saying the decision must be made by the United Nations, and noting the need for the Taliban to recognize the interests of all Afghan ethnic groups and respect human rights.

Asked if Russia's increasingly close ties with China could evolve into a military alliance, Putin said Moscow and Beijing have no intention of doing so.

“We are friends with China based on our shared interests, not against someone,” he said. “And unlike NATO we don't want to create a closed military bloc.”

Turning to Ukraine, Putin said that its growing military ties with the U.S. and its NATO allies is a “real threat” to Russia.

Russia and Ukraine have remained in a tug-of-war after Moscow's 2014 annexation of Ukrainian Crimean Peninsula and support for a separatist insurgency in eastern Ukraine.

Moscow has staunchly opposed Ukraine's bid for membership in NATO, saying it would represent a major security threat.

Putin noted that even if Ukraine doesn't formally become an alliance member, plans to set up training centers there by some NATO members could be a cover for troops and weapons.

“They may put anything there under the guise of training centers." Putin said. “The formal membership in NATO may never come, but the military development of the territory is already under way. And that creates a real threat to the Russian Federation."

Asked about the presence of Russian private military contractors in Mali, which drew complaints from France, Putin charged that they pursue purely business interests and don't represent the Russian state.