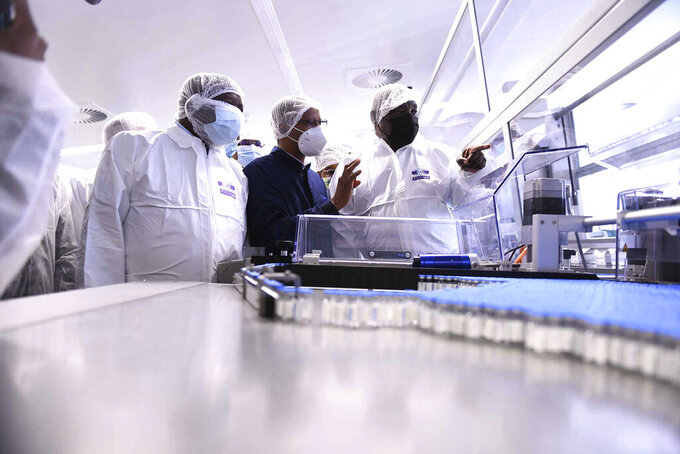 Uncredited, ASSOCIATED PRESS
FILE — South African President Cyril Ramaphosa, right, heads a government delegation on a visit to ASPEN Pharmaceuticals in Port Elizabeth, South Africa March 29, 2021. The first factory to produce COVID-19 vaccines in Africa has announced on Thursday, Mar 12, 2022 that it has not received adequate orders and is planning to stop production within a few weeks, in what a senior World Health Organization official described as a "failure" in efforts to achieve vaccine equity. (AP Photo,file)

JOHANNESBURG (AP) — The first factory to produce COVID-19 vaccines in Africa says it has not received enough orders and may stop production within weeks, in what a senior World Health Organization official described Thursday as a “failure” in efforts to achieve vaccine equity.

South Africa's Aspen Pharmacare said that it cannot let its large-scale sterile manufacturing facilities sit idle, and will return instead to making anesthetics. At the outset of the COVID pandemic, the company shifted its production and achieved capacity to produce more than 200 million doses annually of the one-shot Johnson & Johnson vaccine.

"It was widely hailed as a great achievement for Africa, a game-changer for the continent. But it has not been followed up with orders. We have not received any orders from the big multilateral agencies," Stavros Nicolaou, senior executive for strategic trade development at Aspen Pharmacare, told The Associated Press Thursday.

"COVAX has placed orders for 2.1 billion doses of COVID vaccines and not a single one has been placed with Aspen or any other African manufacturers,” said Nicolaou, referring to the U.N.-backed effort to distribute coronavirus vaccines to poorer countries.

“It's a cardinal sin to have valuable sterile manufacturing capacity and not put it to use," said Nicolaou. "We cannot leave this production capacity idle. We will have to repivot from vaccine manufacturing and return to producing anesthetics unless in the short term we get firm orders for our COVID-19 vaccine.”

Nicolaou said the lack of orders “is not great for Africa's ambition to reduce its dependence on imported vaccines from 99% to 40%. If we fail at this first step, this is bad not just for Aspen but for all others aspiring to make vaccines in Africa.”

At a press briefing on Thursday, Dr. Abdou Salam Gueye, the WHO's emergencies chief in Africa said: “it may be a failure but we will learn from it.” He added that if orders were to ramp up, the factory could likely be restarted relatively quickly.

“It is unfortunate that this plant did not receive enough orders,” he said, saying that Africa got two-thirds of its vaccines via COVAX and that those vaccines were ordered by vaccines alliance Gavi.

In a statement, Gavi said Aspen was “an active part” of J&J’s manufacturing network and that the vaccines alliance was “extremely enthusiastic” about buying COVID shots made in Africa.

But it said when J&J fulfilled its COVAX order, those shots came from outside the continent.

“COVAX is still under contract with J&J and we would be very happy for any doses that we are still expecting to be supplied by Aspen,” Gavi said. “We have communicated this to J&J. However, again this is solely a decision that rests with J&J.”

J&J did not immediately respond to a request for comment.

Health officials have repeatedly decried the concentration of vaccine production in rich countries, saying the lack of manufacturing capacity in poorer countries was among several factors that put them at the back of the line when COVID-19 vaccines were initially made last year.

“The global community spends billions of dollars to shore up military defenses that might never get used, but refuses to spend a fraction of that to support global health defense,” said Zain Rizvi, research director at the advocacy group, Public Citizen.

He said global purchasers like COVAX should support manufacturers in poorer countries and described globally distributed vaccine manufacturing as “our protection against this virus.”

Francois Venter of the University of the Witwatersrand in Johannesburg said the “cheap rhetoric” from politicians and drugmakers about helping Africa make its own vaccines had clearly not translated into orders.

“Africans have been totally failed by the global community, their governments, and agencies,” he lamented, noting that as rich countries roll out their fourth doses, most Africans haven’t even had one.

The production of locally-made shots at Aspen's factory was heralded as a first step toward Africa's efforts to meet its own vaccine needs — but there was significant criticism after reports emerged last year that the majority of its shots were being exported to Europe, according to its deal with J&J.

While nearly 70% of people in rich countries have been immunized against the coronavirus, just 17% of Africa's 1.3 billion people have been vaccinated, according to statistics issued by the Africa CDC on Thursday. In South Africa, 45% of adults are fully vaccinated, although about 85% of the population is thought to have some immunity based on past exposure to the virus.