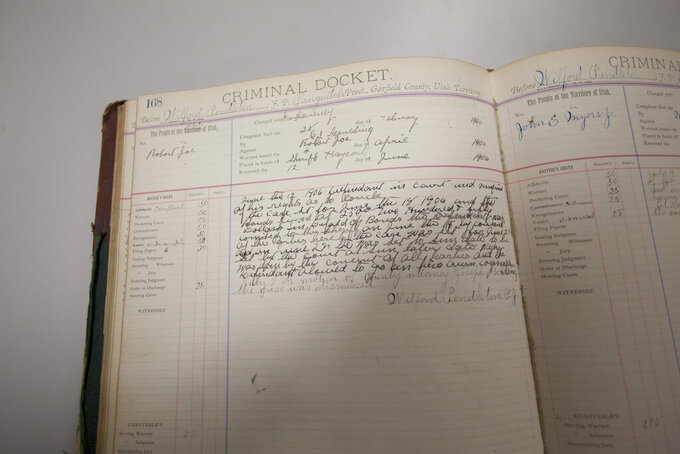 Chris Caldwell, ASSOCIATED PRESS
An early-20's century justice docket could provide clues to finding the remains of Paiute children who were housed at a boarding school in Panguitch, Utah, Thursday, Aug. 26, 2021. Utah is just starting to reconcile its own history of Indian residential schools with the proposed excavation on the site of a former school in Panguitch that is believed to have over a dozen bodies of Native American children. (Chris Caldwell/The Spectrum via AP)

ST. GEORGE, Utah (AP) — Utah is just starting to reconcile its own history of Indian residential schools with the proposed excavation on the site of a former school in Panguitch that is believed to have over a dozen bodies of Native American children.

There are six known boarding schools within Utah, with the largest one located near Brigham City. The school in Panguitch primarily housed Utah Paiutes and Kaibab Paiutes Native Americans and this school operated from 1904 to 1909.

Although this residential school only operated for a few years, similar Indigenous assimilation efforts such as the Indian Student Placement Program lasted in the state until 2000, the Spectrum newspaper reported.

United States Tribal and government officials began looking into deaths at residential schools after more than 800 bodies of children were found throughout Canada earlier this year.

These schools were used to assimilate Indigenous populations in America by trying to eliminate Native American culture, according to historians, and they became the embodiment of the infamous phrase “Kill the Indian, Save the Man,” originally said by Richard Pratt, the founder of the Carlisle, Pennsylvania boarding school and a U.S. Army general.

In June, 10 bodies of kids who attended the Pennsylvania school were returned home to their families.

In May, 215 bodies were found at the Kamloops Indian residential school in British Columbia, Canada. That finding kicked off many other similarly tragic discoveries in the country and across the continent.

In June, the Secretary of the Interior Deb Haaland wrote a memo promising her department will create a detailed report on Indian residential schools.

“While it may be difficult to learn of the traumas suffered in the boarding school era, understanding its impacts on communities today cannot occur without acknowledging that painful history. Only by acknowledging the past can we work toward a future we are all proud to embrace,” Haaland wrote in the memo.

This report will primarily try to identify residential school sites, burial grounds near these schools and the identities and tribal affiliations of the children buried. This report should be completed by April 1, 2022.

Funding for Indigenous assimilation programs in America first started with the passage of the Indian Civilization Act of 1819 which tasked religious groups to educate Native Americans. These efforts led to parents being coerced or forced to send away their kids and it wasn’t until the passage of the Indian Child Welfare Act of 1978 that created stricter guidelines for the separation of Indigenous families.

The United States first established these residential schools in the late 19th century and the Indigenous kids who attended — sometimes through force — got uniforms, had their hair cut, names changed and were punished physically anytime they spoke their native language. The common sentiment at the time in the U.S. was that Native Americans needed to be assimilated into “the American way of life.”

Often these residential schools were run by different faith groups including Methodists, Latter-day Saints (LDS) and Catholics. One of the first reported residential schools opened in 1860 on the Yakima Indian Reservation as a part of the peace treaty which formed the Yakama nation, according to the Northern Plains Reservation Aid.

Although the first iterations of these schools were opened on reservation lands they soon began opening schools near American towns which forced Indigenous children to leave their community for the school year.

Many survivors of these residential schools say they suffered physical, psychological and sexual abuse. This abuse sometimes resulted in the death of the children, others died while trying to escape these schools. Abuse of Native American children was also present in other 20th-century assimilation efforts including one program that was started in Utah.

The Indian Student Placement Program was sponsored by The Church of Jesus Christ of Latter-day Saints and was run from 1947 to 2000. This program started in 1947 but didn’t get sponsored by the church until 1954, according to the church. The program had missionaries approach Native American families and offer to have their children move in with an LDS foster family during the school year and return for the summer.

A 1976 document from the church identifies the objective of the Indian Student Placement Program as “to provide Lamanite children with educational, spiritual, social, and cultural opportunities that would contribute to their leadership development.”

Lamanite is a term from the Book of Mormon which refers to a group of people that settled in the Americas from Israel but turned their back on the Gospel and were cursed with dark skin. The church believed it had a mandate to help the Lamanites and convert them.

The president of the LDS Church at the time that document was released was Spencer W. Kimball, a staunch advocate for LDS outreach to Native Americans who described this program as an “inspiration from the Lord.”

In total, the Indian Student Placement Program placed 50,000 Native American children in homes that were in good standing within the LDS church, as reported by the Atlantic. These kids had to be baptized before entering the program with some instances of the children having wet hair from their baptism when they were introduced to their host family.

In 2018, the LDS church settled a lawsuit with members of the Navajo Nation that alleged they were sexually abused while in this program. The terms of the settlement were confidential and included no admission of wrongdoing by the church.

This was just one of many Native American assimilation efforts that were taken in the 20th century. In total there were over 489 residential schools in the U.S. and Canada, with the last residential school on the continent being shut down in 1996, according to the Union of Ontario Indians.

Assimilation programs in the 20th century didn’t just target Native American children. Another main policy was called “termination” which was a policy meant to terminate federal recognition and supervision of Native American Tribes and take more of their land.

The U.S. enacted termination policies in 1953, removing Indigenous people from their land. The land was sold and the people were relocated into urban areas and were promised good jobs. However, when Native Americans were relocated to cities the work was often less than rewarding, many felt out of place, and the housing offered was often sub-par.

In total, termination policies enacted across the country took somewhere between 1.3 million to 2.5 million acres of land from Native Americans and more than 12,000 people lost tribal affiliation.

This termination policy worked poorly, with around 50% of relocated Native Americans deciding to return to reservations. These policies were phased out during the ’60s and during the Civil Rights Movement. In 1968, President Lyndon B. Johnson signed the Indian Civil Rights Act which called for the end of termination and instead allows tribes to self-determine their futures.