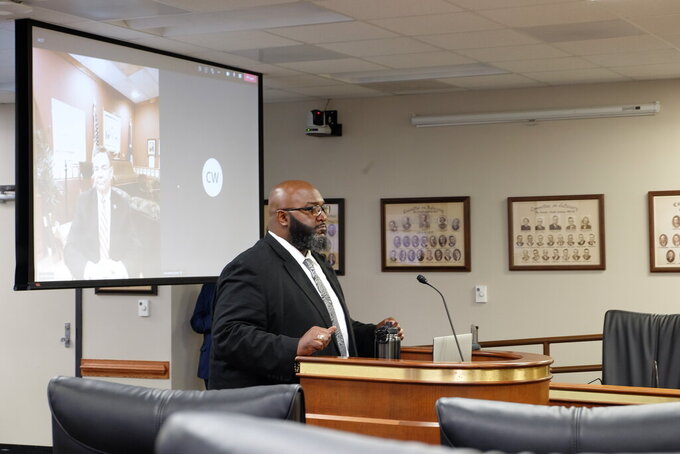 COLUMBIA, S.C. (AP) — The leader of South Carolina's juvenile justice agency announced Tuesday he is quitting about three months after officers and teachers walked off the job leading to a no confidence vote from state senators.

Freddie Pough's resignation letter mentioned none of the turmoil of a scathing audit this year that found increasing violence and inadequate security or employees complaining of poor pay and bad management.

Instead, the one-page letter Pough sent to the governor said he was proud of his four years with the Department of Juvenile Justice, citing fewer children in state prison and a drop in the number of children who return behind bars.

“At this time of great forward momentum, and the agency’s assured ability to alter the juvenile justice landscape of this state, I believe it is the appropriate time to resign my position,” wrote Pough, who will step down Oct. 15.

State Sen. Katrina Shealy, who has made improving the lives all all children one of her priorities and drove from her Lexington home to stand by the workers who walked out in June, said she is glad Pough left, but he stayed way too long.

“He's not a bad man, but boy did he do a bad job,” the Republican senator from Lexington said. “I guess he messed it up as bad as he could and he decided it was time to go.”

The agency's interim director after Pough leaves will be Eden Hendrick. She was named senior deputy director at the juvenile agency last week, according to the governor's office.

Hendrick was assistant general counsel at the state Department of Administration and has spent time as a lawyer for the Department of Social Service and running the Family Court Division in the Richland County prosecutor's office.

South Carolina Gov. Henry McMaster said he will begin looking for Pough's replacement immediately. The governor stood by Pough even as criticism grew, echoing the director's explanations that he inherited a bunch of problems and just needed more money, staff and time to turn things around.

“I’m grateful for Mr. Pough’s five years of leadership at the Department of Juvenile Justice and his passion for the work of rehabilitating the young people who come under the supervision of the agency," the governor said in a statement.

The governor's appointment must be approved by the state Senate, which voted 34-4 in June on a no confidence resolution for Pough's leadership. It was the first renunciation of an agency director since 2014.

Shealy said whomever McMaster picks will be scrutinized.

“It will be a very serious vetting process. We want to find someone who cares about the best interests of the children,” she said.

Pough's time leading the juvenile justice agency included a 2020 report from federal investigators who found the agency was violating the civil rights of children in its prison from failing to train staff to using “punitive, prolonged” isolation units that left youths confined to small, dark cells for 23 hours a day.

Then in April, the Legislative Audit Council released its report which found a significant increase in violence, problems getting timely medical care and excessive use of isolation as punishment, with some students even missing testing to get high school diplomas because they were locked up by themselves.

That led to hearings by lawmakers, and in June about two dozen officers and teachers walked out of the state's juvenile prison because of low morale and low pay. They said violence between inmates and against staff continued to increase and staffing levels were so low that employees sometimes had to work 24- to 36-hour shifts without breaks due to the fact that so many of their coworkers had already quit.