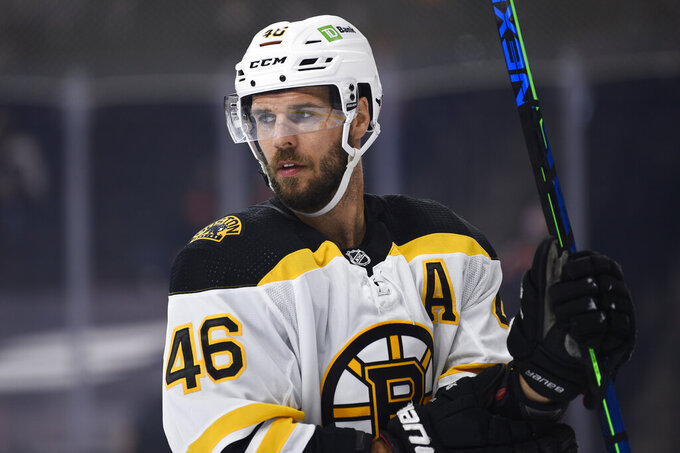 Derik Hamilton, ASSOCIATED PRESS
FILE - Boston Bruins' David Krejci is shown during an NHL hockey game against the Philadelphia Flyers in Philadelphia, in this Saturday, April 10, 2021, file photo. Krejci is leaving the Boston Bruins after 14 NHL seasons to continue his hockey career in his native Czech Republic. Krejci announced what he called a difficult decision in a social media post sent out by the Bruins on Friday, July 30, 2021. The 35-year-old whose contract expired had said he needed time to think about his future. (AP Photo/Derik Hamilton, File)

BOSTON (AP) — David Krejci is leaving the Boston Bruins after 14 NHL seasons to continue his hockey career in his native Czech Republic.

The 35-year-old Krejci, whose contract had expired, announced his decison in a social media post sent out by the Bruins on Friday.

“At this point in my career and life, I need to return to the Czech Republic and play in front of my family who sacrificed so much to help me achieve my NHL dreams,” Krecji said. “I want my children to live where I grew up, spend time with so many Czech family members who love them and create lifelong memories.”

Krejci was a steady, reliable second-line center whose career in Boston included winning the Stanley Cup in 2011. After making his debut in 2007, he piled up 215 goals and 515 assists in 962 regular-season games and 124 points in 156 career playoff games, helping the Bruins reach the final three times.

Playing in Europe would open up Krejci to represent the Czech Republic at the 2022 Winter Olympics in Beijing if the NHL does not participate.