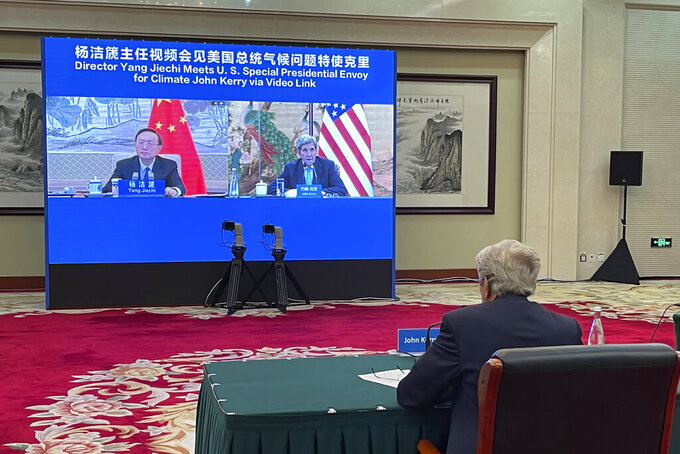 Uncredited, ASSOCIATED PRESS
FILE - In this Sept. 2, 2021, file photo provided by the U.S. Department of State, U.S. Special Presidential Envoy for Climate John Kerry attends a meeting with Yang Jiechi, director of China's Office of the Central Commission for Foreign Affairs, via video link in Tianjin, China. Kerry came to China seeking to press the world's largest emitter of greenhouse gases to do more in the global effort to hold down the rise in temperature. What he got was renewed demands for Washington to change its stance toward China on a host of other issues from human rights to Taiwan. (U.S. Department of State via AP, File)

BEIJING (AP) — U.S. climate envoy John Kerry came to China this week seeking to press the world’s largest emitter of greenhouse gases to do more in the global effort to hold down the rise in temperature.

What he got was renewed demands for Washington to change its stance toward China on a host of other issues from human rights to Taiwan, the self-governing island that China claims.

The back and forth underscores a divide between the world’s two largest emitters that is complicating chances for a breakthrough agreement on carbon reduction goals at COP26, a United Nations conference to be held in Glasgow, Scotland, in November.

Both sides agree that climate is an area of joint interest, but while the U.S. says they should cooperate despite their differences, China says the U.S. cannot expect cooperation while also attacking it on other issues.

“The U.S. side wants the climate change cooperation to be an ‘oasis’ of China-U.S. relations,” Foreign Minister Wang Yi told Kerry. “However, if the oasis is all surrounded by deserts, then sooner or later, the oasis will be desertified.”

Kerry told reporters in a conference call at the end of his visit that his mandate is limited to climate, but that he would convey the Chinese concerns to President Joe Biden and Secretary of State Antony Blinken.

The U.S. envoy, himself a former secretary of state, discussed climate with Chinese counterpart Xie Zhenhua in the city of Tianjin, about 100 kilometers (65 miles) southeast of Beijing. But Chinese state media focused on his three video meetings with Wang and two other senior officials, reinforcing China's objections to America's approach to the overall relationship.

“They were quite pointed in talking about the difficulties that it presents,” Kerry said. “They wanted the message to be heard. And it was, that there's great concern in China about this.”

Chinese officials intended to make clear to the Biden administration that “it is impossible to gain China’s cooperation on climate change while maintaining anti-China stances on major issues,” said Shi Yinhong, professor of international relations at Beijing’s Renmin University.

China positioned itself as a leader on promoting renewable energy and reducing carbon emissions after former President Donald Trump withdrew the U.S. from the 2015 Paris climate accord. China is a world leader in producing solar panels and wind turbines for renewable energy.

However, its climate policies have come under increasing scrutiny following Biden’s decision to rejoin the Paris agreement and set a goal of cutting up to 52% of U.S. greenhouse gas emissions by 2030 — double the previous target — vaulting the U.S. into the top tier of countries on climate ambition

The sides have identified the climate crisis as an area for possible cooperation, but this week’s meetings offered little indication of progress.

Kerry told Han that there was “no way” for the world to solve the climate crisis without China’s “full engagement and commitment.”

China is the world’s largest emitter, producing an estimated 27% of global greenhouse gases, followed by the United States. China obtains roughly 60% of its power from coal and is opening more coal-fired power plants, while also committing to reducing its use of the fossil fuel.

China “hopes the American side will create the appropriate circumstances for jointly tackling climate change based on the spirit of the conversations between their leaders,” Xinhua quoted Han as saying.

China has set a target of generating 20% of its total energy needs from renewables by 2025, reducing total emissions starting from 2030 and becoming carbon-neutral by 2060.

Kerry is pushing China and other countries for more ambitious efforts to keep rising temperatures to no more than 1.5 degrees Celsius (2.7 degrees Fahrenheit) over pre-industrial levels.

He said that Chinese officials had raised concerns about U.S. actions they see as harmful to overall emissions-reduction efforts, notably U.S. sanctions on solar panels that the Biden administration believes China produces with the forced labor of ethnic minorities.

Those matters were up to Biden and Blinken, Kerry said, “but I will certainly pass on to them … the full nature of the message that I received from these three leaders.”

Moritsugu, The Associated Press news director for Greater China, has covered Asia for more than 15 years.