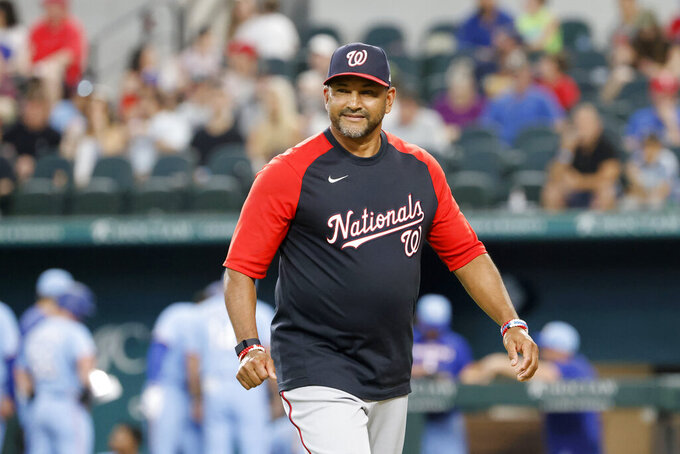 WASHINGTON (AP) — Dave Martinez and Mike Rizzo are signed through the 2023 season after the Washington Nationals exercised their contract options for the World Series-winning manager and GM.

Managing principal owner Mark Lerner announced the moves Saturday before the team's 80th game of a season that has already included 50 losses. Martinez and Rizzo are now overseeing a rebuilding effort after helping the Nationals win their first championship in 2019.

"I’m just really happy that I’ll be here and I get to see this thing through," Martinez said. “This my home. I love it here. I love the people I work with.”

Getting Martinez and Rizzo under contract is of particular importance given the anticipated ownership change facing the franchise. The Lerner family began exploring selling the Nationals in April.

Lerner said it was only right to move forward with Martinez, who was hired after the 2017 season, and Rizzo, who is in his 14th year running the club's baseball operations.

“Mike has led us through many different phases of our organization, and we believe his work during this current phase will pay off in the end,” Lerner said in a statement. “Davey has done a tremendous job in the clubhouse and in the dugout for five seasons. His continued determination and unwavering support of his players makes us proud.”

The biggest question facing the Nationals now is the future of superstar outfielder Juan Soto. While Martinez has acknowledged many of his current players won't be with the team when it returns to contention, the soon-to-be 24-year-old Soto has become the face of the franchise and efforts are ongoing to sign him long term — well before he can become a free agent after the 2024 season.

Martinez may not be around that long if new ownership makes wholesale changes, but he was glad Washington's coaching staff all got two-year deals when hired. Now he and Rizzo are set to be back, as well.

“I couldn’t see myself doing this without Rizz," Martinez said. “He’s guided me through my first year here through thick and thin. He’s like a brother to me.”