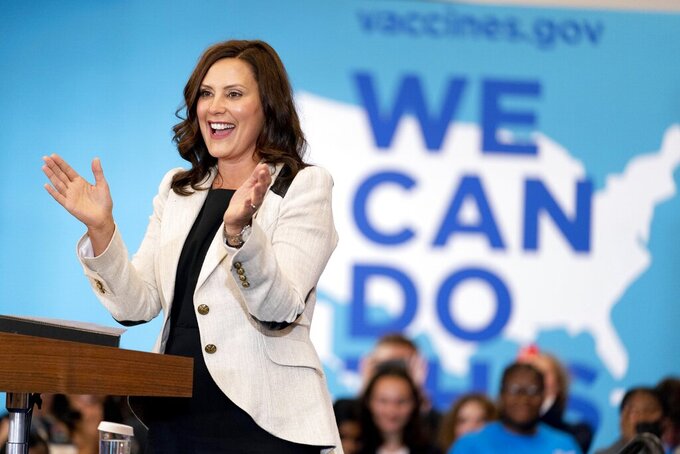 Andrew Harnik, ASSOCIATED PRESS
FILE - In this July 12, 2021, file photo Michigan Gov. Gretchen Whitmer speaks at a vaccine mobilization event in Detroit. Gov. Whitmer's veto of $155 million in proposed spending on reading scholarships for students has sparked fresh criticism from opponents who say it would have addressed pandemic-related learning loss and approval from those who liken the grants to vouchers. (AP Photo/Andrew Harnik, File)

LANSING, Mich. (AP) — Gov. Gretchen Whitmer's veto of $155 million in proposed spending on reading scholarships for students has sparked fresh criticism from opponents who say it would have addressed pandemic-related learning loss and approval from those who liken the grants to vouchers.

The Democratic governor struck the Republican-backed program while signing a $17 billion school budget this month. It would have been funded with federal COVID-19 relief aid.

The GOP-controlled House unsuccessfully tried to override the line-item veto on Wednesday.

The funding would have gone to Grand Valley State University to disburse up to $1,000 each to public K-5 students who are not proficient in reading. The scholarships could have been used for instructional materials, tutoring, summer and afterschool programming.

“These $1,000 stipends for parents to use for their learners as they see best are one of the innovations that we need moving forward in this new normal that many leaders in education are fond of saying that we're in,” said Rep. Brad Paquette, a Niles Republican. He called educators who oppose the scholarships “defenders of the status quo” and accused them of using “shoddy tropes” to criticize the initiative.

Democrats who had supported the K-12 budget backed Whitmer's decision.

“I cannot think of a more fiscally irresponsible way to spend taxpayer dollars than by giving away $155 million to GVSU to distribute its vouchers without any oversight from the state,” said Rep. Regina Weiss of Oak Park.

The university could have used up to $5.5 million for administrative costs depending on the number of applicants.

“Why don't we just cut out the middleman? We could instead appropriate $155 million directly into our schools with educators who are in the best position to give the students the support that they need,” Weiss said, saying the money could be used to hire 2,000 more literacy coaches.

The veto was a rare flashpoint in an education budget that had broad bipartisan support and will eliminate a decades-long funding gap among districts, except in about 40 historically higher-spending districts. The governor and lawmakers have not reached consensus on funding for universities, community colleges, local governments and state departments that operate welfare, health care, public safety and other programs. The next fiscal year starts in October.

“We look forward to working with the Legislature to continue the conversation about this funding to support literacy initiatives that will help our kids,” Whitmer spokesman Bobby Leddy said. Literacy coaches who help teachers with strategies to get students reading at grade level by the end of third grade have tripled since she took office, he said.

Groups representing superintendents and school boards had urged the governor to veto the “voucher program." Teachers unions also opposed it. While vouchers are public funding that can be used for private-school tuition, advocates for public education say taxpayer money should not go to other private entities, either.

If the initiative had been enacted, Grand Valley would have developed a catalog of eligible services for parents to choose from: instructional materials or curricula, part-time tutoring services, specialized summer education programming and afterschool programming.

The veto was condemned by Betsy DeVos, the former U.S. education secretary and longtime school-choice advocate. She called it “indefensible” on Twitter and during an interview with radio station WJR. Fewer than half of students are proficient on the state's standardized English language arts test.

It is unclear how the $155 million will be spent or when the governor and legislators may come to an agreement. It is part of $6.5 billion in discretionary funding sent to Michigan through the most recent U.S. coronavirus rescue package.