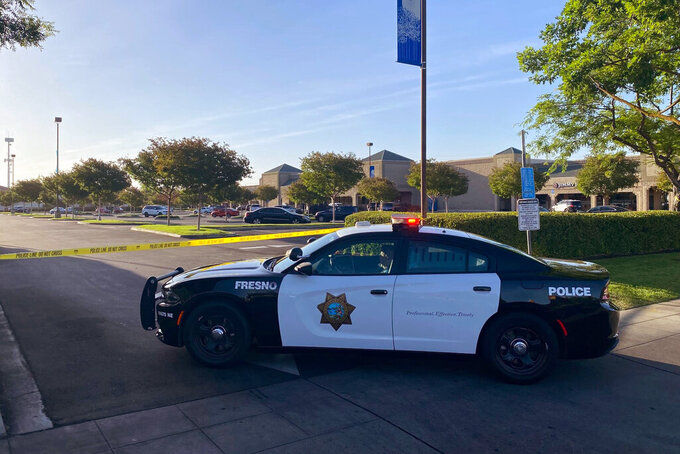 Thaddeus Miller, ASSOCIATED PRESS
Police investigate the scene where a suspect was barricaded inside a Save Mart store after an officer-involved shooting in Fresno, Calif., Friday, May 20, 2022. Fresno police killed an armed man they said charged at them Thursday and authorities opened fire in a second Fresno shooting involving a fleeing robbery suspect who rammed patrol cars, authorities said. (Thaddeus Miller/The Fresno Bee via AP)

SAN FRANCISCO (AP) — San Francisco authorities were investigating the deaths of two men after an incident in which police responded to a report of an assault in progress and officers fired shots.

The incident occurred shortly before 8 p.m. Thursday. Police did not say whether the deaths were caused by the officers shooting.

One man died at the scene and the other at a hospital.

San Francisco police announced the shooting in a brief email and did not respond to requests Friday for more information about the circumstances.

Elsewhere in California, Fresno police killed an armed man they said charged at them Thursday after a family called 911 to report that he was violating a restraining order.

Police Chief Paco Balderrama said officers encountered a 27-year-old man with a gun in his waistband. Officers retreated and surrounded the home but at some point the man charged at officers and one fired, Balderrama said.

When more deputies arrived, two suspects ran into a store and were later taken into custody. Another drove off and rammed patrol cars, authorities said. A deputy opened fire but the driver fled into grocery store, where a standoff continued Friday.

Balderrama said officers searched the store, which is in a strip mall, and used dogs and drones but had not found the suspect as of Friday afternoon. He said officers found clothes and footprints that lead him to believe the man is still in the strip mall.

“It’s a difficult place to search, because it is a big grocery store,” Balderrama said. “There are a lot of hidey-holes ... it’s not a typical or easy place to search.”

Classes at a nearby middle school were canceled as a safety precaution, he said.