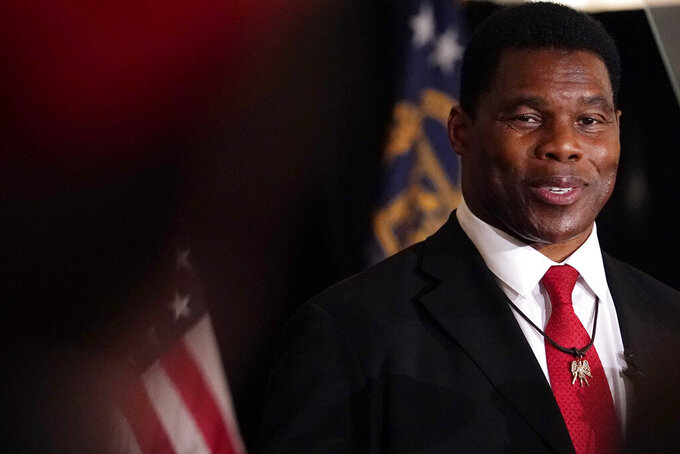 The dueling Senate campaign numbers underlined two truths. Georgia is again going to be one of the most expensive races to run for office in 2022, and Democrats are building a strong fundraising advantage.

Like Warnock, Democrat Stacey Abrams heavily outraised incumbent Republican Brian Kemp in the race for governor, collecting almost $50 million compared to the $31 million Kemp has brought in over a longer period. Abrams and Warnock plan to run closely linked campaigns, echoing many of the same themes.

Warnock is one of several Democratic Senate incumbents in swing states who is trying to cling to their seat amid President Joe Biden's deep unpopularity. Republicans had long dominated statewide races until Georgia helped elect Biden to the presidency and enabled Democrats to control the Senate by electing Warnock and fellow Democrat Jon Ossoff in a January 2021 runoff.

The period topped the January-March stretch when Warnock raised almost $13.6 million, which his staff said was the most ever raised by a U.S. Senate candidate in the first quarter of an election year.

Warnock, also pastor of the church once led by the Rev. Martin Luther King Jr., is already spending heavily to fend off Walker. The incumbent's cash in the bank actually fell from $25.6 million in March to $22.2 million in June as Warnock spent more than $20 million even while the election remains months away.

That's, in part, because the Democrat is already under heavy attack. The National Republican Senatorial Committee and its associated nonprofit One Nation spent $3.3 million against Warnock in about a month ending in mid-June.

Walker's campaign also spent all that it raised in the quarter, with its cash on hand falling below $7 million.

Both campaigns are raising money nationwide. Walker, backed by former President Donald Trump and Senate Minority Leader Mitch McConnell, says he got 70,000 donations from all 50 states in the April-June quarter. Walker has raised more than $20 million in less than a year. Warnock has now raised more than $80 million for his reelection, saying he received contributions from 258,000 donors.

Walker is mostly working to tie Warnock to Biden, hoping that will lead voters to reject Warnock over high gas prices and inflation.

“Sen. Warnock has done more for Joe Biden than Georgia...,” Walker said in a statement. “Georgia deserves a Senator that will work for them – not Washington insiders.”

Warnock has been trying to address rising prices, pushing a federal gas tax holiday, a $35-a-month price cap on insulin, and proposing that states should be allowed to use federal COVID-19 relief money to temporarily roll back sales taxes on some goods. He's also attacked Walker as unfit to serve, noting Walker has lied about graduating from college and exaggerated his business success and has frequently stumbled on the stump.

Walker announced a wave of new staff members Monday, most with broad national Republican experience, in an effort to beef up a campaign that coasted through a Republican primary based in part of adoration of Walker's past as a University of Georgia football demigod.

The move came as Walker took hits for his position that the United States does not need to do anything about air pollution or carbon dioxide emissions because China is a worse polluter.

“Since we don’t control the air our good air decided to float over to China’s bad air so when China gets our good air, their bad air got to move," Walker said Saturday. "So it moves over to our good air space. Then now we got we to clean that back up.”

Walker has been making similar remarks for months, but they came under new scrutiny after the Walker campaign kicked a reporter out of the Saturday event being hosted in a public park in Gainesville. That's another example of a Walker campaign that has often shielded the candidate from all but friendly questions.

Warnock became Georgia’s first Black U.S. senator after winning a special election in 2020 to fill the unexpired term of Republican Sen. Johnny Isakson, who stepped down because of failing health. Isakson died in December.