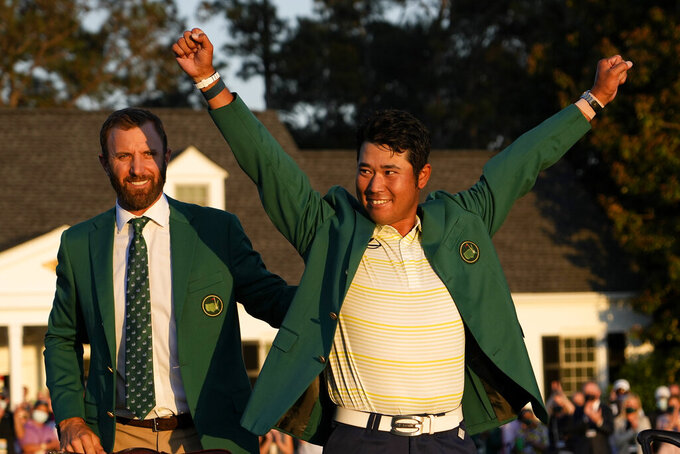 David J. Phillip, ASSOCIATED PRESS
FILE - In this Sunday, April 11, 2021 file photo, Hideki Matsuyama, of Japan, puts on the champion's green jacket after winning the Masters golf tournament as Dustin Johnson watches in Augusta, Ga. Matsuyama already is thinking about what to serve at the champions dinner next April. It likely will include sushi. (AP Photo/David J. Phillip, File)

McKINNEY, Texas (AP) — Hideki Matsuyama has the simple goal of getting his game back in shape at the AT&T Byron Nelson, his first tournament since becoming the first Japanese player to win the Masters.

Local favorite Jordan Spieth didn't intend to be away just as long but ended up getting COVID-19, while four-time major winner Brooks Koepka is ready for another test of a balky right knee that had him hobbling at Augusta National.

For all three major champions, the return of the Nelson after a coronavirus cancellation in 2020 — and now the second relocation of the event since 2018 — comes with eyes on next week's PGA Championship.

Matsuyama returned to Japan after winning the Masters and had to quarantine for two weeks before getting to celebrate the victory in his golf-loving home country.

“Not picking up a club very much over there, I didn't get to practice very much at all,” Matsuyama said Tuesday through an interpreter. “And then coming back here, and I'm just, really one of my goals now is just to try to find my game again.”

When defending champion Sung Kang won his first PGA Tour event at the Nelson two years ago, it was the first time the Dallas-area tournament was played the week before the PGA, which Koepka won for his fourth victory in a span of nine majors.

Koepka played this year's Masters less than a month after surgery to repair a dislocated right knee cap along with some ligament issues. The 31-year-old says he is still on the mend.

“Still be a while before I'm 100%,” said Koepka, who has finished in the top 16 three times in five previous Nelsons. “It’s dramatically better than it was at Augusta. I’m ahead of schedule.”

The TPC Craig Ranch course in McKinney, about 30 miles north of Dallas, is the 10th venue in the history of a tournament that dates to 1944.

In 2018, the Nelson moved from its longtime home at the Four Seasons in Irving to Trinity Forest in southern Dallas, the first time it had been played inside the city limits since 1982. But the setup wasn't good for spectators, and the field suffered with players skeptical of the treeless links layout.

Craig Ranch is Kang's home course, and just about that for 24-year-old Masters runner-up Will Zalatoris, who grew up not far from the course after moving from California.

Zalatoris attended every Nelson at the Four Seasons for a decade when he was set to make his playing debut on a sponsor's exemption as a freshman at Wake Forest in 2015. He fell ill before the event and had an emergency appendectomy, forcing him to wait a year. He has since missed the cut twice, including the first Trinity Forest event.

“I still have the autographed hats that I had,” Zalatoris said. “I was one of the kids asking for autographs from guys walking off 18. So it’s kind of fun seeing it all come full circle.”

Spieth tested for positive for COVID-19 the second week after the Masters and had to skip the Valspar Championship two weeks ago.

Trinity Forest was Spieth's home course, and the 27-year-old isn't as familiar with the new venue as Yang and Zalatoris. The former Texas Longhorn's most vivid memory is a bad one — falling short in his attempt to qualify for the PGA Tour nine years ago.

Eleven years after contending on Sunday as a high schooler at Four Seasons, Spieth has his game in much better shape than the last time he played his hometown event. He ended a nearly four-year victory drought at the Valero Texas Open in San Antonio the week before the Masters and tied for third at Augusta.

“I’m just kind of starting to get it back the last week or so and kind of get back on track,” said Spieth, who has never finished in the top 10 of his hometown event, despite his eye-opening debut as a 16-year-old. “I’m looking to kind of maybe knock a little rust off that I didn’t think would necessarily be here.”