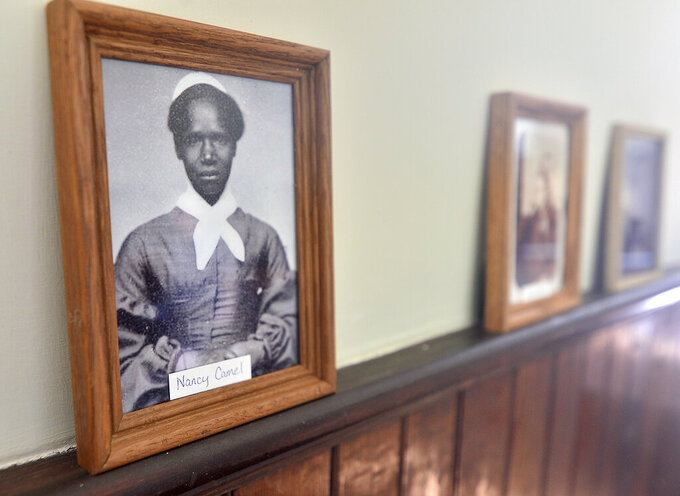 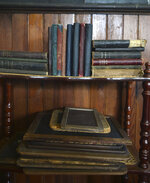 SHARPSBURG, Md. (AP) — For most of the American Reconstruction period following the Civil War, a one-room chapel on Sharpsburg’s East High Street served as church and school for the local African American community.

As the center of religious gatherings and education for a group that included former slaves, Tolson’s Chapel would have been a safe haven for the Black community, according to Edie Wallace, a historian and a past president of the nonprofit The Friends of Tolson’s Chapel.

The 1866-built chapel is “probably the finest example out there from a historian and architectural historian’s point of view” of the Black experience during Reconstruction, Wallace said.

The National Park Service recognized that importance and designated Tolson’s Chapel a National Historic Landmark in January 2021. In the midst of a global pandemic, the honor didn’t receive a ceremony at the time. But The Friends of Tolson’s Chapel is hosting a dedication and unveiling of a bronze plaque with the national designation at the church this month. The park service will participate in the program.

The chapel, in 2008, was listed in the National Register of Historic Places for its state and local significance, according to the chapel’s application to become a National Historic Landmark. The former church and school also are listed as a contributing building for the Sharpsburg Historic District listed in the national register.

The timing of the chapel’s National Historic Landmark application was fortuitous as the National Park Service, which oversees the national landmark program, was looking for buildings or sites representative of the Black experience during Reconstruction, Wallace said.

The only other place in Washington County that is designated a National Historic Landmark is Fort Frederick, which received the honor in 1973, according to the historic landmarks’ website. A state park, the stone fort near Big Pool was built to be part of the state’s frontier defense during the French and Indian War.

The landmark designation opens the Tolson’s nonprofit up to more grant opportunities and has already led to more visitors for the historic chapel, Wallace said.

A Montessori high school class from Kensington, Md., visited the chapel last year and several younger home-school classes have visited. Wallace said the Montessori educator, looking for buildings representative of the Black experience during Reconstruction, learned about Tolson’s through a new website the National Park Service created about the chapel.

The educational experience for the students included a re-enactor who talked about life in Sharpsburg for the Black community and how it came together to build the chapel, she said.

The chapel is open to the public for free tours from noon to 4 p.m. on the first Saturday of the month from April through October.

Edie Wallace, a past president of The Friends of Tolson’s Chapel, said the person who donated the pot-belly stove recounted buying it from Virginia Cook and Frances Monroe, among the chapel’s last members, when the stove was sitting in front of the chapel on sale. Wallace said the stove looked to be from around 1900 to 1920 and would have been used to provide heat.

In the summer, the windows would have been opened or perhaps activities were held outside.

The chapel is named for its first pastor, John Tolson, a Black man assigned to the Hagerstown circuit by the Methodist Church’s Washington Conference — its Black conference, Wallace said. The congregation was established in 1865, a year after the state of Maryland abolished slavery.

The chapel’s cornerstone was laid in 1866 and in October the following year, the building was dedicated, according to a Tolson’s Chapel brochure.

“It gave them independence. A space where they were free to be themselves. That they weren’t being watched,” Wallace said.

As of 1860, a year before the start of the Civil War, 1,435 free Blacks lived in Washington County, according to the chapel’s application to become a National Historic Landmark. That population included Blacks who were born free and former slaves who were set free or who bought their freedom. Census data indicates, per the application, that “most free Blacks in the Sharpsburg area worked as servants, housekeepers, farm hands or ‘laborers.’”

Approximately 10 free Blacks owned real estate. That included Samuel Craig, who along with his wife, Catherine, donated the land for the chapel to create the Sharpsburg Methodist Episcopal Church, according to Wallace and church history. Tolson was reassigned to the Winchester, Va., church circuit, but the Sharpsburg church was named for him after his death in 1870.

Wallace said, to her, the church’s association with the Freedmen’s Bureau is nationally significant. Congress established the bureau in 1865 to guide the South from a slave society to a free-labor society, according to the chapel’s register application. The bureau’s duties included helping freed people establish schools.

The bureau assigned Ezra Johnson, a white man, to be the first teacher at the “American Union School” in Tolson’s Chapel in April 1868, according to the application and brochure. Later teachers would be Black, including John J. Carter and James Simons. Simons’s father, David, was one of the chapel’s first trustees and who became the school’s first teacher during its tenure as a county school, Wallace said.

According to a teacher’s monthly school report, posted at the nonprofit’s website, Tolson’s had 18 students in April 1868. Of those, three were older than 16. The school included primary students, Wallace said.

The Sharpsburg Colored School operated in Tolson’s until 1899, when a frame schoolhouse was built in the area, according to the chapel’s brochure.

The church operated until 1998, according to the national register website for the chapel. That was two years after the death of the last church member from Sharpsburg, Virginia Cook.

The church underwent major restoration in the 2000s. This included removing asphalt shingles that were probably added over the logs and vertical board siding in the 1940s to make the chapel appear brick, Wallace said. About 20% of the original logs were replaced. Replica white pine siding was used to replace about 80% of the vertical boards and all new batten was installed, she said.

The chapel also got new cedar roof shingles and the windows were restored using mostly original materials, according to the nonprofit’s website.

Wallce said no more burials will occur in the cemetery behind the chapel.

Ground-penetrating radar was used to determine there are potentially 12 unmarked graves behind the chapel, Wallace said.

The cemetery has 36 marked burials with death dates, according to a 2013 preservation assessment of the cemetery. Cook and the Simonses are among those buried in the chapel’s cemetery. Others buried there include Wilson Middleton, a church trustee and member of the U.S. Colored Infantry; Hilary Watson, who was enslaved at the Otto Farm; and Jeremiah Summers, who was enslaved at the Piper Farm. Both farms are part of Antietam National Battlefield.

A few items from Tolson’s Chapel will be part of the reorganized display at Antietam National Battlefield when the visitors center, undergoing an approximately $7 million rehabilitation, is complete, said Park Ranger Keith Snyder, the battlefield’s chief of resource education & visitor services. Snyder said he’s hoping the center is ready to reopen this fall.

Park officials started from scratch in redesigning how to organize the battlefield museum, Snyder said. A team of historians worked around five universal concepts —conflict, terror, survival, freedom and memory.

The chapel items will be in the freedom section because freedom is a complicated story, particularly in Maryland, Snyder said.

While freedom is directly tied to the Emancipation Proclamation, which President Abraham Lincoln issued on Jan. 1, 1863, slavery was abolished in Maryland on Nov. 1, 1864, through a new state constitution.

One thing evident is that when the enslaved did get their freedom in Maryland, at least in Sharpsburg, the first things they sought were religion and education, Snyder said.

“Tolson’s is the perfect example of both because it served as church and school,” Snyder said.

The items planned for the new battlefield museum display include a book and inkwell — to represent the school — and a Bible, Snyder said.

The Bible belonged to Nancy Camel, whose last name has been spelled a variety of ways including Campbell.

Camel, 40 years old in 1860, was “employed as a servant on the William Roulette farm,” according to the chapel nonprofit’s website. She had been enslaved by Peter Miller, a Roulette family member by marriage, and freed by Andrew Miller in June 1859. It appears Camel immediately took a job at the Roulette home where she stayed the rest of her life, the website states.

Camel was a member of both Tolson’s Chapel, to which she donated a large Bible, and to Manor Church, a Dunker church north of Sharpsburg in whose cemetery she was buried, the website states.