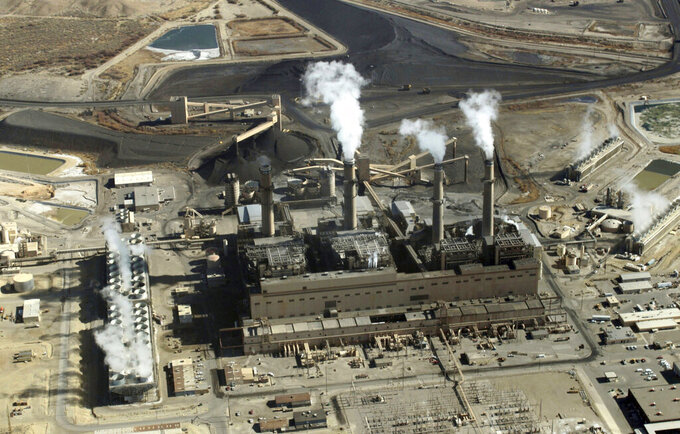 ALBUQUERQUE, N.M. (AP) — With little ceremony, it was lights out Thursday for one of the two remaining units at a coal-fired power plant in northwestern New Mexico that has provided electricity for millions of customers in the southwestern U.S. for nearly a half-century.

Unit 1 at the San Juan Generating Station was shuttered as state regulators ordered New Mexico’s largest utility to credit customers for millions of dollars in savings that will come from the plant’s closure in September, when the final unit goes offline.

Public Service Co. of New Mexico had planned to wait to pass along the savings until its next rate case before the Public Regulation Commission, but regulators in ordering quicker action said they have a responsibility to ensure that rates charged to customers are fair, just and reasonable.

The utility has vowed to appeal the decision, warning that applying a short-term credit would not be reflective of the costs to provide service to customers and that new rates proposed later this year would be much higher than they otherwise would have been.

PNM executives have said that such a "roller coaster” would significantly affect customers.

Pat Vincent-Collawn, PNM Resources chair and CEO, characterized the commission's decision as an arbitrary penalty, noting that the utility opted not to file for rate increases over the last two years as it navigated a transition to more renewable energy resources.

The battle over financing and customer rates related to the closure of the San Juan plant has been ongoing for months.

A need to keep part of the plant open longer than expected also raised questions about the timing for issuing bonds that would allow the utility to recover lost investments in the plant.

Regulators approved PNM's request to keep one unit open for an additional three months to avoid blackouts during the summer when air conditioners help drive up demand. The utility had warned that without San Juan, it wouldn't have the capacity to meet customer needs since solar and battery storage projects meant to replace the coal-fired plant were behind schedule.

Under the commission's ruling, utility customers would see a rate reduction of about 10%, or an annual savings to customers of about $94 million, when the plant closes in September. The order also prevents PNM from collecting operating costs since the plant would no longer serve customers.

The utility has denied that its plans amount to double dipping or that customers will miss out on savings.

The push in recent years for utilities to provide more electricity from non-fossil fuel resources has been driven by state mandates and tougher federal requirements aimed at reducing pollution.

The Biden administration has pledged to cut greenhouse gas emissions by half by 2030, and New Mexico's mandates call for carbon-free generation within the next two decades. Environmentalists voiced concerns Thursday about meeting those goals given a ruling by the U.S. Supreme Court that limits how the nation’s main air pollution law can be used to reduce carbon dioxide emissions from power plants.

An inventory done earlier this year by the U.S. Energy Information Administration found that 85% of the scheduled retirements in 2022 involve coal-fired power plants, followed by natural gas and nuclear.

Still, there have been growing pains in New Mexico and elsewhere as demand outpaces the ability to construct more solar and battery storage operations. PNM has blamed supply chain issues for its delays, and in California, fossil fuel plants might have to be tapped to avoid blackouts.

Most of the coal-fired plants making up the remaining fleet in the U.S. were built in the 1970s and 1980s.

The San Juan plant and its towering concrete stacks have been part of northwestern New Mexico's skyline since the 1970s. It has powered parts of Arizona, California and New Mexico over the years.

In the past week, workers have gathered for lunch and cake to mark the end of Unit 1.

Some workers had exit interviews Thursday, and many were holding out hope that the city of Farmington would be successful in its effort to keep the plant open as part of a proposed carbon capture project that has received some federal funding.

Justin Yazzie marked his last evening shift, opting for retirement after working for the utility for 44 years. He said it was a good job that allowed him to provide for his family.

“My heart is really hurting for the younger people. They don't have the same opportunity that I had and we sure need it now,” he said, pointing to the growing pressure on oil and gas operations and other industries that have historically been the drivers of economic development in more rural areas in New Mexico and elsewhere in the West.