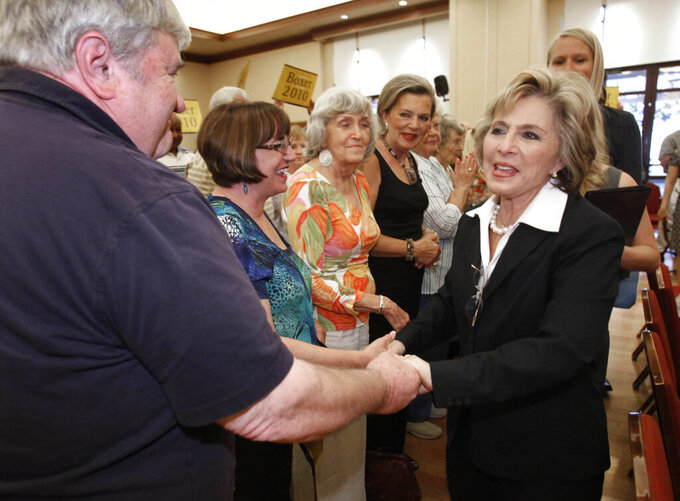 Rich Pedroncelli, ASSOCIATED PRESS
FILE — In this Oct. 13, 2010, file photo former California U. S. Senator Barbara Boxer shakes hands with supporters during a campaign stop in Lincoln, Calif. Boxer was assaulted and robbed Monday July 26, 2021, in the Jack London neighborhood of Oakland, Calif. A statement on Boxer's verified Twitter account says the assailant pushed her in the back, stole her cell phone and jumped into a waiting car. The 80-year-old Boxer was not seriously injured. (AP Photo/Rich Pedroncelli, File)

“The assailant pushed her in the back, stole her cell phone and jumped in a waiting car,” the tweet said. "She is thankful that she was not seriously injured.”

The tweet was confirmed via email by Boxer's son, Douglas Boxer, an attorney.

Responding to multiple media inquiries, the Oakland Police Department confirmed a robbery at about 1:15 p.m. in the area, but didn't identify the victim.

The suspect fled in a waiting vehicle, police said. The robbery is under investigation.