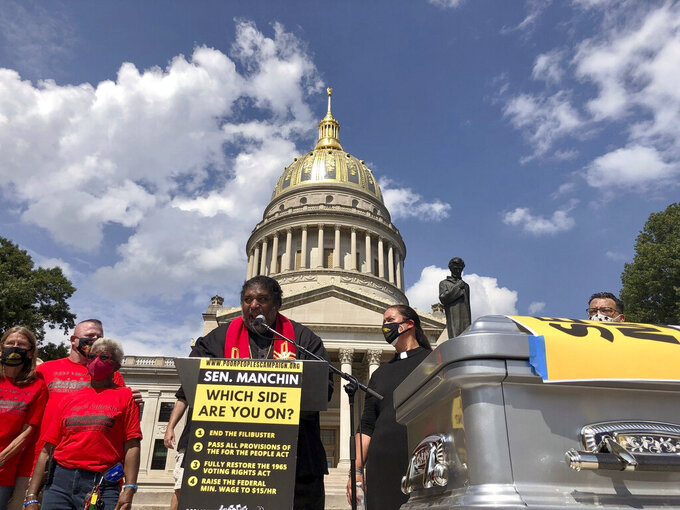 John Raby, ASSOCIATED PRESS
The Rev. William Barber, co-chair of the Poor People's Campaign, speaks during a rally Thursday, Aug. 26, 2021, at the state Capitol in Charleston, W.Va. The rally was aimed at applying pressure on U.S. Sen. Joe Manchin, who has opposed a sweeping overhaul of U.S. election law and a $15 federal minimum wage. (AP Photo/John Raby)

The Poor People's Campaign took out the full-page ads Sunday in the Charleston Gazette-Mail, The Herald-Dispatch in Huntington, The Parkersburg News and Sentinel and The Journal of Martinsburg.

The group has repeatedly pressed the influential moderate Democratic senator that includes conducting a rally at the state Capitol in Charleston last month. Manchin has opposed a $15 federal minimum wage and an elections bill that he said he couldn't support because it lacked bipartisan support.

The Poor People's Campaign also had a news conference scheduled Monday to urge Manchin to help change Senate filibuster rules that have blocked passage of legislation. Scheduled participants include state organizers as well as the group's national co-chairs.

Manchin long has defended the filibuster as many of his Senate colleagues have shifted on the issue.