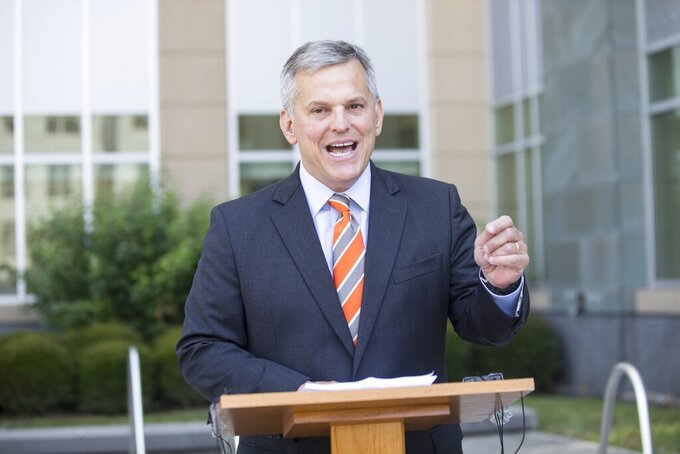 RALEIGH, N.C. (AP) — A federal judge opened the door Tuesday for a district attorney to try to prosecute someone for a 2020 campaign ad by North Carolina Attorney General Josh Stein using a specific criminal count that the Democrat contends is unconstitutional on free-speech grounds.

Eagles reversed herself after hearing more in-person arguments last week. She wrote that the law was constitutionally permissible because it “criminalizes false defamatory speech about public officials made with actual malice” and provides enough “breathing space” for speech protected under the Constitution.

“The statute advances compelling state interests in protecting against fraud and libel in elections and is narrowly tailored to serve those interests,” wrote Eagles, a nominee of President Barack Obama.

Tuesday’s decision can be appealed to the 4th U.S. Circuit Court of Appeals in Richmond, Virginia. Stein’s campaign was reviewing the order, a spokesperson said late Tuesday.

The ruling is a blow to Stein, a possible 2024 Democratic gubernatorial candidate. No one has been charged in the case, and it’s unclear who specifically would have been targeted -- Stein among others.

The law in question makes it a misdemeanor for someone to knowingly circulate false “derogatory” reports about a candidate to hurt that candidate’s chances in the election. The commercial criticized Republican nominee Jim O’Neill, then and now the Forsyth County DA, about untested rape kits held by local law enforcement agencies.

Eagles’ initial order was issued July 25, the same day that Freeman’s office had planned to take the results of an investigation over the ad to a grand jury, according to legal briefs.

A few days earlier, Stein’s campaign, the consulting firm that produced the ad targeting Stein’s challenger and a woman who appeared in the ad sued in Greensboro federal court.

O’Neill cited the law in his September 2020 State Board of Elections complaint against Stein’s campaign committee over the commercial, which asserted that O’Neill “left 1,500 rape kits sitting on a shelf” in Forsyth County.

O’Neill said the ad was false because police agencies, not prosecutors, are responsible for testing the kits. Stein defeated O’Neill by fewer than 14,000 votes in the November 2020 election.

In 2021, the State Bureau of Investigation ultimately interviewed Stein, members of his campaign staff and the woman in the ad, who also worked in the AG’s office, according to briefs.

The lawsuit placed Stein in the role of seeking to strike down a law that he would usually defend in his elected job as the state’s top law enforcement officer.

The lawsuit was filed in part against Freeman, a fellow Democrat in the most prominent DA’s position in the state, as political corruption and campaign-related cases usually originate in Wake County. Freeman recused herself from the investigation, citing her working relationship with both Stein and O’Neill, and put it in the hands of a senior assistant DA.

A signed statement by an SBI agent said Stein told him in a December 2021 interview that the “disputed ad was an important corrective” to false accusations by O’Neill that Stein had failed to act on over 15,000 untested rape kits during his time as attorney general. Stein said he had reviewed the ad before it was aired.

Stein’s attorney argued that the law, which dates back to at least 1931, violates First Amendment protections and that similar criminal campaign-speech limitations in other states have been struck down.

Regardless, Stein campaign lawyer Press Millen wrote, nothing was aired to indicate O’Neill was legally responsible for getting the kits tested. O’Neill had a constitutional duty to advise Forsyth County law enforcement agencies, Millen added.

O'Neill said in an emailed statement late Tuesday that it was “an embarrassment to the people of North Carolina” that Stein was now trying “to extinguish the very law designed to prevent politicians like himself from lying to the public."

The statute of limitations on the misdemeanor -- punishable by up to 60 days in jail with fines -- is two years. But someone with an otherwise clean record would avoid active time if convicted.