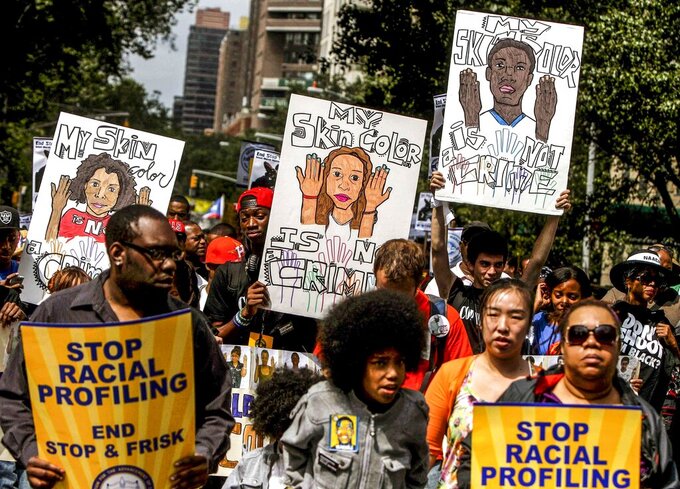 Seth Wenig, ASSOCIATED PRESS
File-This photo from Sunday, June 17, 2012, shows protestors with signs during a silent march to end "stop-and-frisk" program in New York. Eight years after a judge ruled New York City police violated the constitution by stopping and frisking mostly Black and Hispanic people on the street en masse, people in communities most affected by such tactics say they've been shut out of the legal process to end them. (AP Photo/Seth Wenig, File)

NEW YORK (AP) — Eight years after a judge ruled New York City police violated the constitution by stopping, questioning and frisking mostly Black and Hispanic people on the street en masse, people in communities most affected by such tactics say they've been shut out of the legal process to end them.

Lawyers for plaintiffs in two landmark stop-and-frisk lawsuits said in court papers Thursday that community stakeholders have had “very little contact” in the last three years with the court-appointed monitor overseeing reforms and that reports he's issued don't reflect their experiences.

They’re demanding greater input, including an advisory board comprised mostly of reform advocates and public housing residents, annual community surveys and biannual audits of NYPD stop-and-frisk and trespass enforcement activity — the results of which would then be summarized in public reports every six months.

"There has been a disconnect and a drift of this reform process run by the monitor and the impacted communities — the people who are experiencing these patterns of police activity," Corey Stoughton, a lawyer for the Legal Aid Society, said in an interview.

The monitor, Peter Zimroth, was appointed in 2013 by U.S. District Judge Shira Scheindlin after she ruled that the NYPD's stop-and-frisk tactics were a form of indirect racial profiling that violated the Fourteenth Amendment right to equal protection under the law.

Scheindlin also ordered what's known as a joint-remedial process seeking input from more than 2,000 people in communities most impacted by police stop-and-frisk and trespass enforcement practices. That process, which led to more than dozen reform proposals, ended in 2018.

Since then, according to lawyers involved in Thursday's court filing, Zimroth has excluded community members’ perspectives from his semi-annual assessments. Instead, they said, he has relied on NYPD data, statements of police personnel and civilian complaints that have been seen by the court as a dubious measure of whether a stop was motivated by race.

A message seeking comment was left with Zimroth, a law professor and the director of the Center on Civil Justice at New York University. A message was also left with the NYPD.

Plaintiffs in the stop-and-frisk lawsuits held a rally Thursday outside police headquarters on to announce the court filing and demand an end to stop and frisk abuses. They were joined by the city's public advocate, Jumaane Williams, several members of city council and police reform organizations.

The community board proposed in Thursday’s court filing would consist of seven members, including three living in public housing and two from the police watchdog organization Communities United for Police Reform.

The board, similar to ones overseeing police reforms in Seattle and Cleveland, would have a leading role in shaping changes to police discipline, the court papers said.

“If we and other representatives of directly impacted communities are not meaningfully consulted and involved in the Monitorship moving forward, the Monitorship will not result in meaningful changes to the NYPD’s unconstitutional and racially discriminatory stop-and-frisk and trespass enforcement practices,” Loyda Colon, executive director of the Justice Committee, said in a court declaration.

At its peak, the NYPD’s use of stop and frisk resulted in millions of police stops of mostly Black and Hispanic New Yorkers.

Still, activists say, the people police are stopping continue to be predominantly non-white.

“We have not seen the change we hoped we would see,” Sala Cyril, lead organizer with the Malcolm X Grassroots Movement, said in a court declaration. “People in the community are definitely still being stopped illegally.”