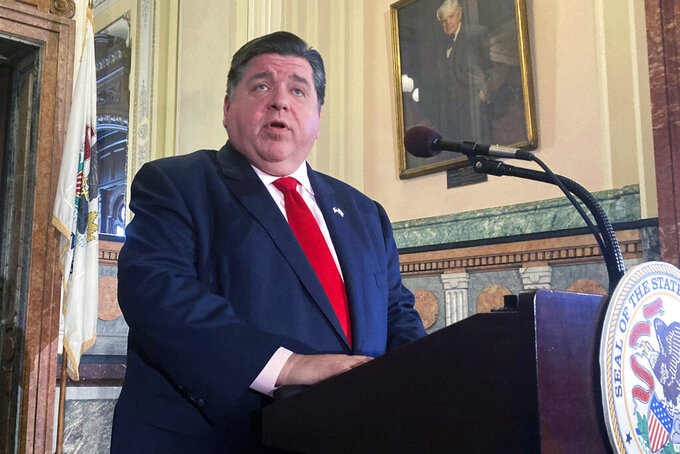 John O'Connor, ASSOCIATED PRESS
FILE - Illinois Gov. J.B. Pritzker addresses reporters on April 7, 2022, in Springfield, Ill., about a budget deal reached among Democrats. The sales tax on groceries in Illinois will be suspended for a year starting Friday, July 1, 2022, under the state budget approved in April. The state’s tax relief program will also postpone a gas tax increase until January and cut school supply taxes from 6.25% to 1.25% in August. (AP Photo/John O'Connor, File)

CHICAGO (AP) — The sales tax on groceries in Illinois will be suspended for a year starting Friday, under the state budget approved in April.

The state’s tax relief program will also postpone a gas tax increase until January, and cut school supply taxes from 6.25% to 1.25% from Aug. 5 to 14.

“Starting tomorrow, every Illinoisan will get tax relief on essentials: groceries, gas, your home, and back-to-school supplies, with even more tax relief going into effect next year,” Gov. J.B. Pritzker said in a news release.

The measures are part of a $1.8 billion state tax-break deal signed by Pritzker in April. GOP leaders derided the measures as a campaign tool for Pritzker and other Democrats in an election year.

Additionally, the Illinois state earned income credit will increase from 18% to 20% of the federal credit, and eligible homeowners will receive property tax rebates equal to their 2021 property tax credit, up to $300.

Illinois’ 1% sales tax on groceries will be suspended through June 30, 2023, which will net $400 million in consumer savings, the governor’s release said.

The state is one of just 13 in the nation that charges a sales tax for groceries.

Lawmakers across the country are enacting tax relief measures like the ones in Illinois, in part in response to inflation, according to Tax Foundation senior policy analyst Katherine Loughead.

The temporary elimination of the grocery tax represents “just a small amount of relief because there’s only a 1% levy on groceries as it is,” she said. “It will go back into effect July 1 of 2023.”

Chicago grocery shopper Bob Goldberg said inflation is “out of control," and a 1% difference won't matter much for the average consumer.

Illinois charged about 55 cents more per gallon for gas than the national average for Thursday, according to the American Automobile Association.

Zubin Shroff of Winfield -- about 35 miles west of Chicago -- said he felt the pinch of fuel cost the whole way during a recent road trip from Boston. But he said the prices were steepest in Illinois.

Shroff called the tax suspensions a “token gesture” by Pritzker. “No one’s gonna turn it down, say no. But is it meaningful, tangible relief? I don’t think so.”

Claire Savage is a corps members for the Associated Press/Report for America Statehouse News Initiative. Report for America is a nonprofit national service program that places journalists in local newsrooms to report on undercovered issues.